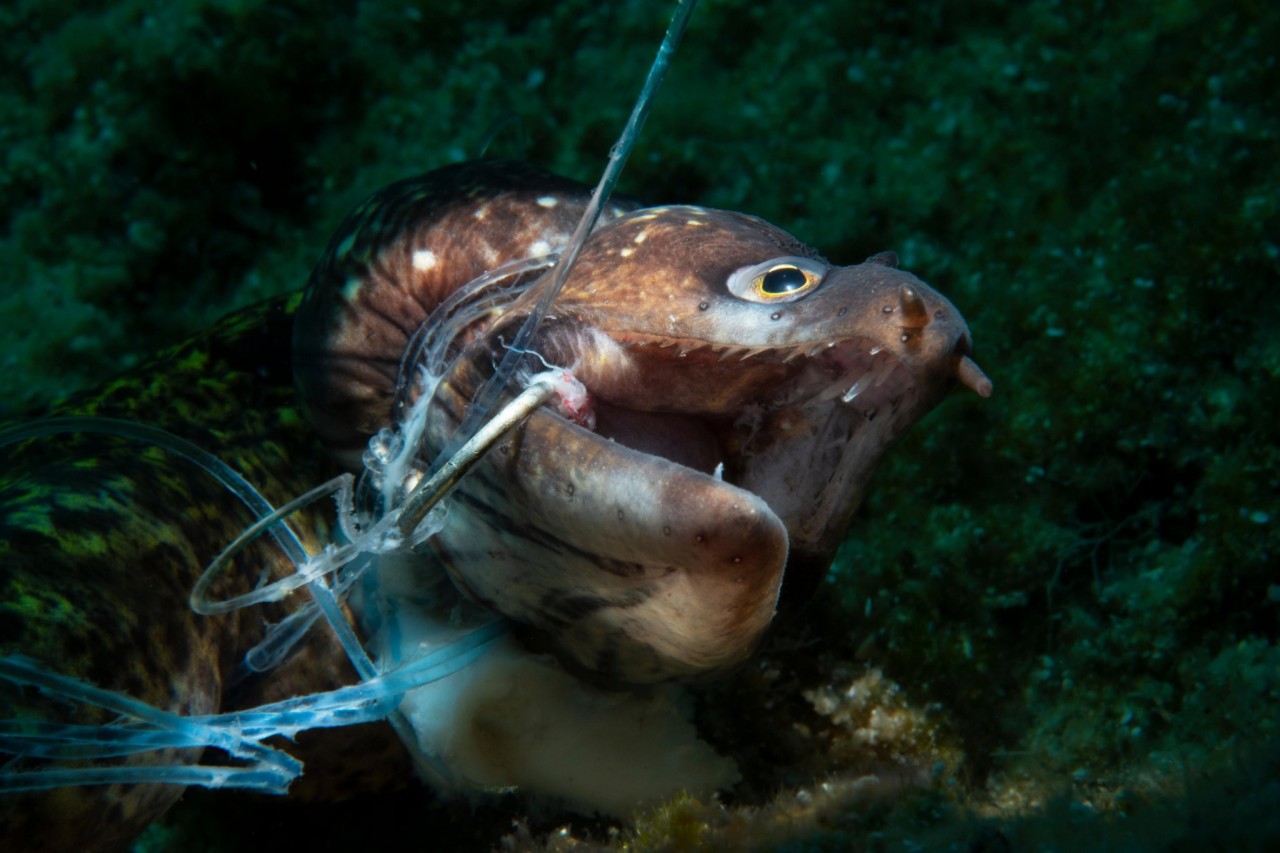 In July, off the Turkish port city of Bodrum, Kerim Sabuncuoğlu stepped from the edge of a boat into the azure Aegean Sea and began to descend. A scuba diver with more than 30 years’ experience, he took up underwater photography in 2002 and has since devoted considerable amounts of time and money to his “out-of-control hobby” – capturing the wonders of the ocean on camera so that “the less fortunate people above” can also marvel at them.

Sabuncuoğlu has travelled the world, photographing marine life in Palau, Cuba and the Galápagos islands and winning several awards for his work. Closer to home in Bodrum, he was embarking on a standard dive with a group of friends, equipped with a Nikon D800 camera. The camera had an 85mm micro Nikkor lens and was clad in Nexus underwater housing, with a single Backscatter snoot to train light on the subject. 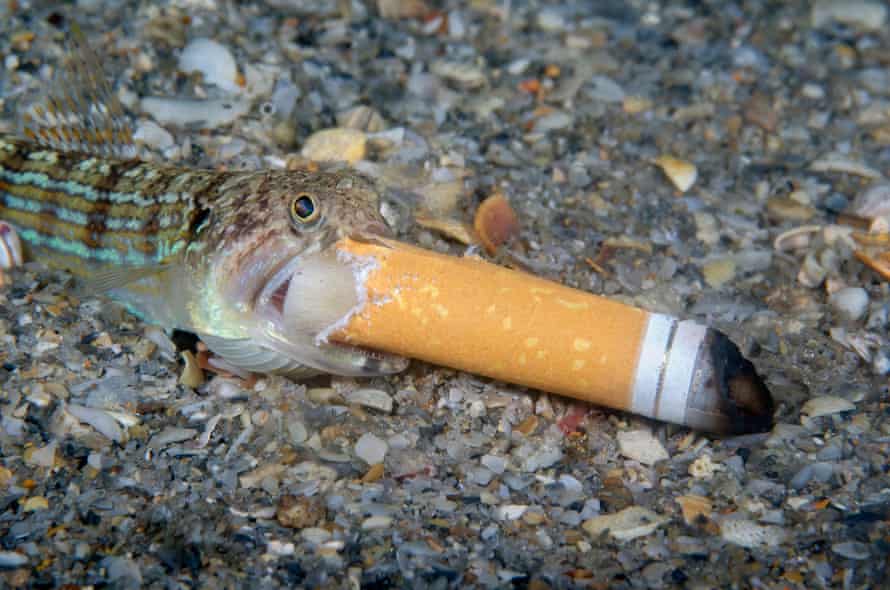 A lizardfish attempts to eat a cigarette end. ‘This image illustrates the environmental issue of people carelessly disposing of trash and the harm it does to wildlife,’ says photographer Steven Kovacs. Photograph: Steven Kovacs

Soon after reaching the sandy bottom and making a right turn towards a cluster of rocks, he spotted a broken fishing line on the sea floor. A grouper was caught on one of the hooks, still alive, so he took it to the surface, removed the hook and set it free.

“I went back to see what else was there, with the pliers,” says Sabuncuoğlu from his home in Istanbul, where he runs an event management company, “and that’s when I found this poor animal: a moray eel. Its favourite food is octopus, and of course when it found the arm of an octopus on the floor, it took a great bite.” A hook concealed in the octopus arm went straight through the moray’s jaw. It spun its body frantically to free itself, but succeeded only in entangling itself in the fishing line. Eventually the eel suffocated and died. 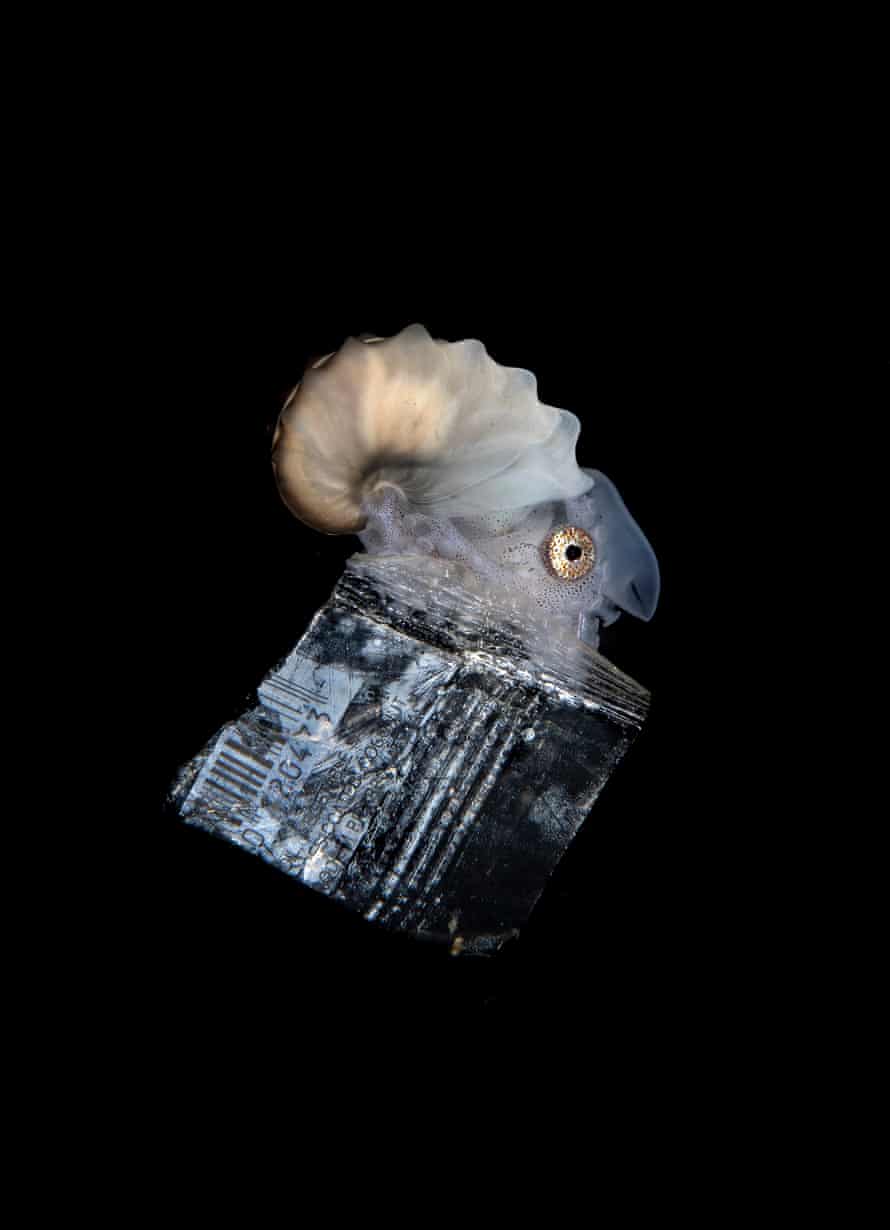 A female paper nautilus drifts along on a piece of rubbish, Anilao, the Philippines. Photographer Steven Kovacs notes that they normally hitch a ride on jellyfish for protection and to preserve energy. Photograph: Steven Kovacs

Sabuncuoğlu had witnessed the result of what’s known as ghost fishing. “When a fisherman leaves his equipment under the water, like a fishing net or line, it keeps on killing fish for many years to come,” he explains. “If I had left this moray eel, some other fish would have eaten the hook, and died as well.”

It’s a worldwide problem. Ghost fishing gear accounts for around an estimated 10% of all marine litter. On the west coast of the US, the National Marine Fisheries Service reported an average of 11 large whales entangled in ghost nets every year between 2000 and 2012. The number of smaller fish and sea life caught annually in nets and pots and on discarded hooks is impossible to estimate, but Sabuncuoğlu puts it in the millions. It is also dangerous for divers, he adds, “because you can get tangled like the moray eel under the water”. 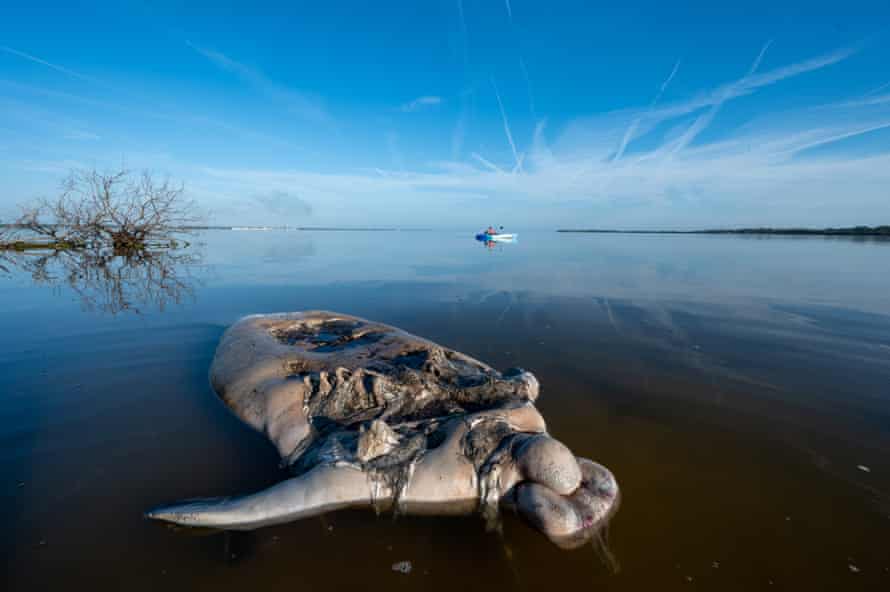 Sabuncuoğlu took 60 or so shots of the eel, but it was only afterwards, as he was editing the images on his computer, that he felt a pang of sadness at how it had died. “You realise it was helpless there,” he says. Everyone he showed the image to reacted in the same way: “They went, ‘Eeeeee, ai ai ai!’” and shuddered. When he submitted it to this year’s Ocean photography awards, under the title Silent Scream, it was shortlisted in the conservation category.

The National Geographic photographer and conservationist Cristina Mittermaier was among the judges who picked Sabuncuoğlu as the ocean conservation photographer of the year. “It’s a fantastic image,” she tells me. “Underwater wildlife communicate in a very different way to terrestrial wildlife, and they don’t have the same facial expressions that an animal like a grizzly bear or a wolf might have. Therefore, making images that create an emotional connection with humans, when you’re photographing fish, is really hard. In this image, the photographer was able to capture a dramatic moment, and the eel actually has a facial expression that conveys emotion. It caught me as soon as I saw it.” 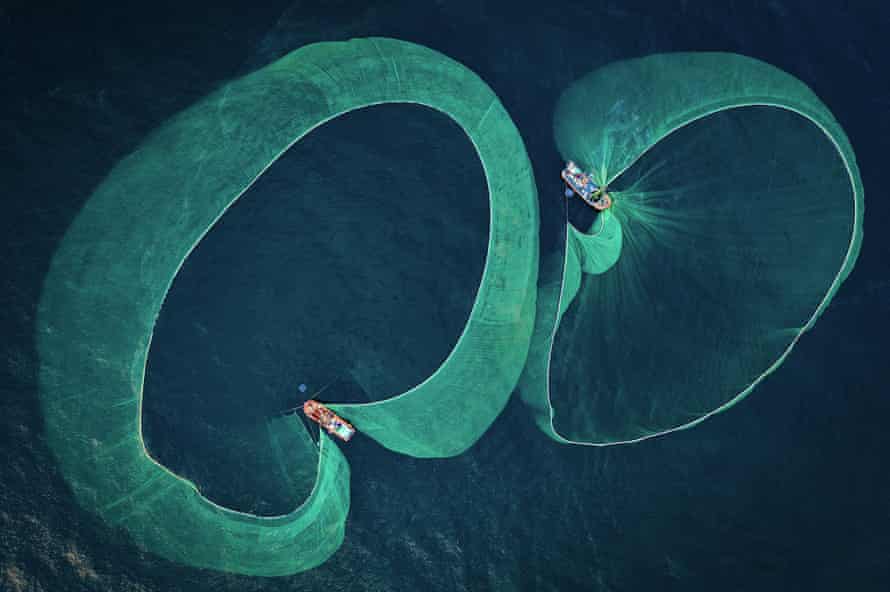 It’s not just the inscrutability of sea creatures that makes it difficult to get humans emotionally involved. Images of environmental devastation can be off-putting too. “You really need to balance the storytelling with beautiful photography,” says Mittermaier, who co-founded the conservation network SeaLegacy, “and I think this image does that really well. When something outstanding comes along that has the power to make people stop, even for just a second, and internalise what they’re looking at, that’s when we start moving the needle.”

It helps that the technology around underwater photography is improving fast, allowing for more vivid shots and illuminating parts of the ocean that were previously obscure. Sabuncuoğlu mentions blackwater photography, which entails diving into deep ocean at night to photograph larval fish and invertebrates as they rise to the surface. 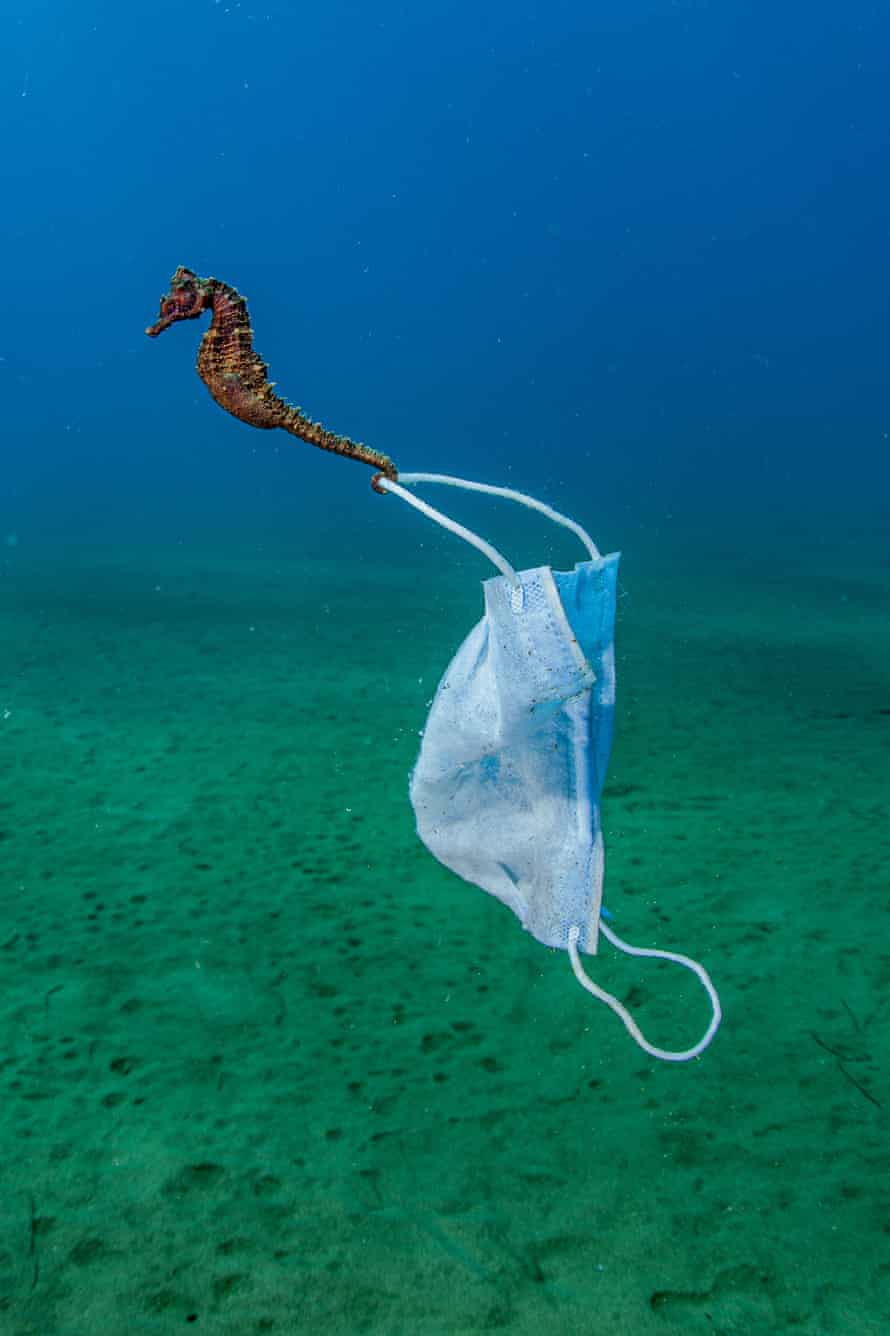 “It’s only in the past 10 years that the technology has advanced enough for us to be able to take our cameras deeper than 30 metres,” says Mittermaier. “And the sensors now available are allowing us to see in the inky depths of the ocean things that we could not capture just five years ago. So it’s advancing very quickly, and it’s becoming more affordable. And as more and more photographers take to the ocean to capture images, we’re slowly building an army of underwater storytellers reporting from the furthest corners of the Earth.”

Sabuncuoğlu likens the experience of exploring the ocean to space travel. “If you don’t have the technology or the funds to go to another planet, just gear up and jump into the water,” he says. “That’s another planet.” Reporting back from that other planet, and showing the extraordinary profusion of life there, is “the most wonderful thing I can ever do in my lifetime,” he says. “I hope I will do it for many years to come, and I hope I can teach more people how to do it. Because if we don’t show the beauties of the underwater, nobody will realise what’s down there, and if you don’t realise it, you don’t protect it. It’s that simple.” 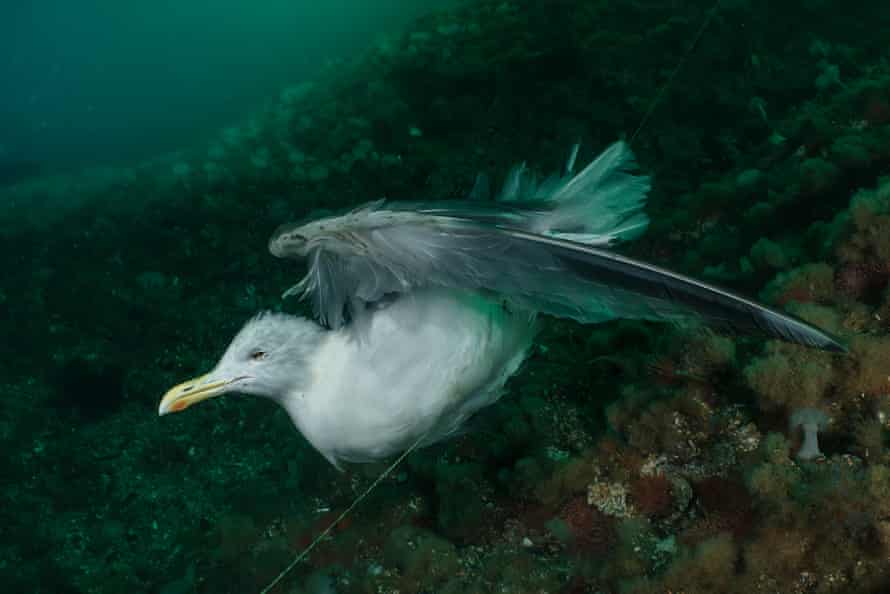