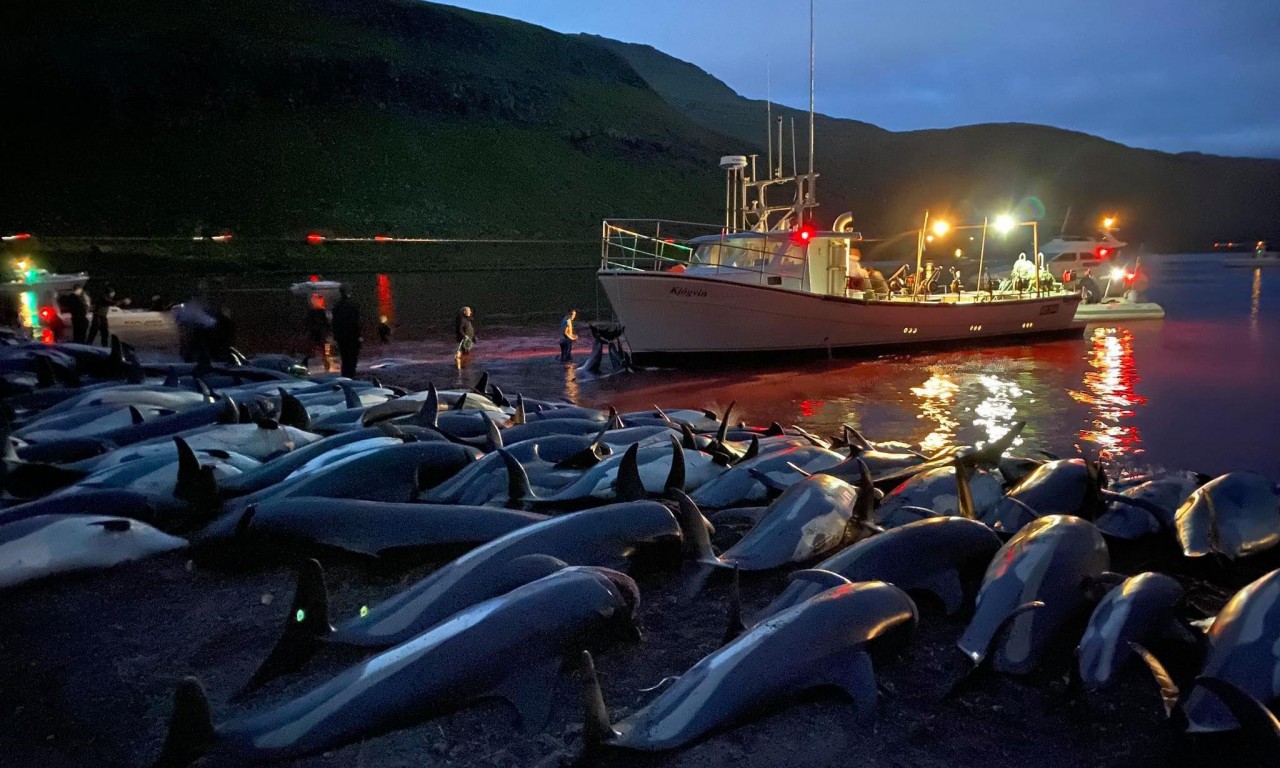 In a parked car overlooking the ocean sit two of the biggest whale killers in the Faroe Islands. They look exhausted, but not from hunting. Ólavur Sjúrðaberg, 75, and Hans J Hermansen, 73, have been on the phone constantly since a mass killing of 1,428 white-sided dolphins in the Faroe Islands on Sunday sparked international outrage and led the Faroes prime minister to announce on Thursday that the government would review the dolphin hunt.

Neither Sjúrðaberg nor Hermansen participated in the killing, but they are the current and former chairman of the Faroese Whalers Association, founded in 1992 to explain and defend the traditional killing of whales in the islands, known as the “grind”, and ensure it is as efficient and respectful as possible.

But while more than 83% of the 53,000 islanders still support the killing of pilot whales – which are also a species of dolphin – 53% are opposed to killing the white-sided dolphin, according to a poll published on Monday by the broadcaster Kringvarp Føroya.

“We’re fighting on one more front now,” said Sjúrðaberg as Hermansen fields another call, referring to the fact that so many Faroese are against the killing of white-sided dolphins. “We have to evaluate the killing every time, including when it may not go according to plan.”

Faroese people have been killing whales and dolphins since Viking times, and the practice was even regulated in the oldest preserved Faroese law, dating from 1298. Practically all whaling in the modern era has involved pilot whales. Pilot whales are the second largest species of oceanic dolphin, surpassed in size only by the orca. All killings of pilot whales have been officially recorded since 1584, and since 2000, an average of about 660 pilot whales and 211 white-sided dolphins have been killed every year in the islands. 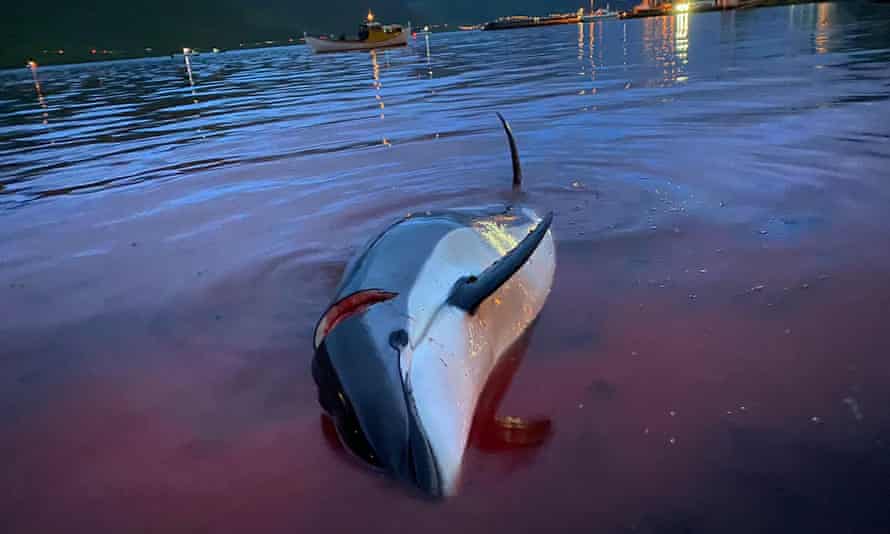 Sea Shepherd released this image of a white-sided dolphin lying dead in blood-stained shallows after Sunday’s slaughter in the Faroe Islands. Photograph: AP

The hunt has been adapted in recent years, including a special tool designed to make the killing as humane as possible, and a law that requires everyone who kills an animal to take a course on how to do it properly and be licensed.

But in essence it remains the same: if a group of pilot whales is spotted, a flotilla of boats sails out and herds them into one of 28 legally approved bays. Then, any islander who wants to can help get the whales on land. For pilot whales they use the special harpoon-shaped tool, which severs the spinal cord, killing the animal immediately. Afterwards, the meat is shared between the hunters and the local community.

Sunday’s hunt, however, shocked many Faroese: the scale of the kill – 1,428 in one day – is more than six times the number usually killed in an entire year.

Some locals have criticised the slaughter because there were too few people to handle the dolphins, and say it took too long.

Also, the more humane harpoon used to kill pilot whales was not used as it is too big for the smaller white-sided dolphin. Instead, they slaughtered the creatures with knives.

Eyðstein Zachariasen was one of the hunters. He said the pod was estimated at 600 dolphins, and claimed the killing would not have gone ahead had the hunters known there were more than 1,400 animals. “I don’t think we will stop killing white-sided dolphins because of this,” Zachariasen said. “But I also think this killing will go into history as the biggest one. I don’t think that many will be killed again.”

Even if they did underestimate the numbers, it remains unclear why the hunters made the decision to kill such a large group. Some Faroese argue the leaders of the hunt showed poor judgment, perhaps out of inexperience.

Regardless, the outcry has crystallised a growing debate in the islands about whether to kill the smaller dolphin at all. On Thursday, the Faroes government said it would “start an evaluation of the regulations on the catching of Atlantic white-sided dolphins”, noting that white-sided dolphin hunts “have not been a part of Faroese tradition to the same degree” as pilot whales.

The prime minister, Bárður á Steig Nielsen, said: “We take this matter very seriously. Although these hunts are considered sustainable, we will be looking closely at the dolphin hunts, and what part they should play in Faroese society.” 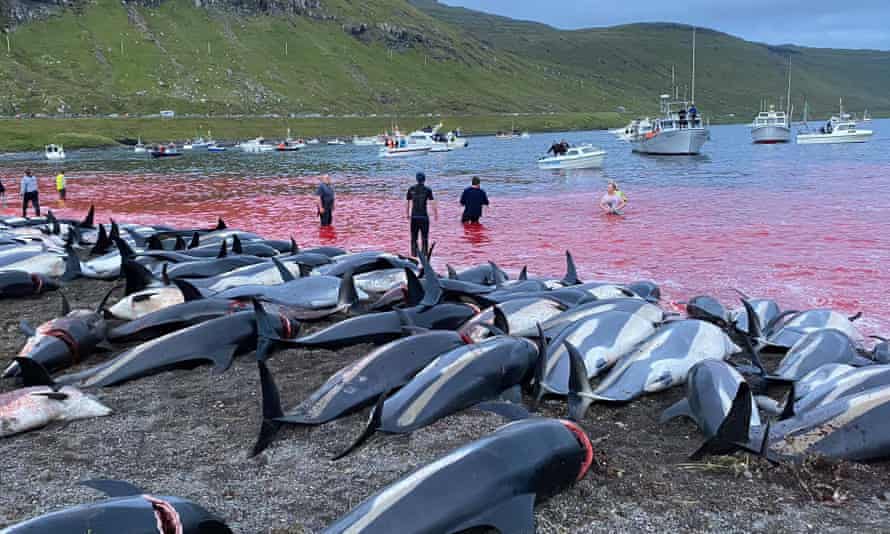 A picture released by Sea Shepherd of some of the white-sided dolphins slaughtered on Sunday. Fewer Faroese people eat these dolphins, raising questions about the practice. Photograph: AP

Jóan Pauli Joensen, a professor of cultural history and author of several books on Faroese culinary traditions, said: “The tradition for killing pilot whales in the Faroes doesn’t include killing white-sided dolphins. Although the killing of white-sided dolphins was registered in 1872, the numbers have never been comparable with pilot whale hunting – and it happened usually only when a stray got mixed in with the pilot whales.

“The white-sided dolphin is smaller and faster, and it isn’t until modern times with speedboats that it has been killed in greater numbers,” said Joensen. Because only a fraction of Faroese eat the smaller dolphins, few support or have a relationship with the hunt, he said.

Most people don’t eat the blubber of the smaller dolphins either. Blubber is one of the most essential parts of the pilot whale. “People eat blubber with both dried and fermented fish,” said Joensen, referring to two key parts of traditional Faroese cuisine.

Criticism of Sunday’s slaughter has been fierce, both locally and internationally. The conservation group Sea Shepherd said Sunday’s hunt was “the largest single killing of dolphins or pilot whales in the islands’ history”. It noted that more animals died on Sunday than in an entire season at Taiji, Japan, which is notorious for its dolphin hunt.

The largest company in the Faroe Islands, the salmon-farming firm Bakkafrost, issued a statement decrying the “slaughter”, saying the company “condemn this episode and find it totally unacceptable”. The chief executive, Regin Jacobsen, told Faroese radio that the company had fielded complaints from customers around the world.

Some locals took to social media to express their displeasure, including one commentator on the Kringvarp Føroya Facebook page saying: “I’m embarrassed to be Faroese.”

Schandorff Vang, 63, a retired policeman, witnessed the massacre. “There were not enough people on land for the killing,” he said. “Some whales were stranded for too long before they were killed.”

He also questioned the white-dolphin hunt. “I have nothing against killing pilot whales, but I don’t think there has been any tradition for killing dolphins, and I don’t like the fact that much of the blubber is not eaten,” he said.

Cod almighty: how a ‘mythical’ Faroes delicacy has vanished

Although the hunters are used to criticism, the reaction seems to have taken some by surprise. Zacariasen said he was baffled by the debate. “I understand that foreigners have a more special relationship with the dolphin than with the pilot whale,” he said. “But to Faroese people, the two animals should have the same value.

Sjúrðaberg and Hermansen think Sunday’s kill went poorly. Sjúrðaberg grew up in Klaksvík, where he says that hunters only killed white-sided dolphins when they were caught in a group of pilot whales; Hermansen is from Hvalvík, where he remembers some dolphins being killed when he was a boy. But they both agree that as long as the hunt is done correctly, all parts of the animal are eaten and the numbers are sustainable, then killing white-sided dolphins is fine.

But they are also aware that, although Sunday’s massacre is unlikely to stop the dolphin hunt, the writing may be on the wall. “We’re killing both whales for food consumption,” Sjúrðaberg said. “But if a majority of the population turns against killing the white-sided dolphins, it will stop naturally as people won’t want to eat it.”

'Free Diver Befriends Octopus While Swimming Underwater'
DIVING
'A spectacular moment was captured on camera which shows a free diver enjoying some company under the water. Recorded on December 12, 2020, in Honolulu, this underwater clip features Brittany Lewish a...
611 Hits
0 comments
Read More