OCEAN STORIES
The fresh, coastal air awaits when you book your next family vacation at one of these charming lighthouses. From a private island in Maine to some beauties along the Northern California coast, these l...
Read more
‘Becoming Cousteau’ Shows the Evolution of the Underwater Icon
A Photographer Marries the Worlds Above and Below the Water in a Single Frame | KQED
Mako-Ing History: Uncovering Mako Shark Movements In The Gulf Of Mexico
World's largest aquarium nears completion in Abu Dhabi
Eco-friendly $811m superyacht powered by solar-panel 'sails' unveiled
Netflix’s New Documentary ‘Seaspiracy’ Is As Eye-Opening As It Is Terrifying
Octopuses, like humans, sleep in two stages, may dream - ARY NEWS
BRP commits to complete electric line, jet skis, motorcycles, go-karts, more
Giant pristine coral reef discovered off Tahiti
11 Gorgeous Lighthouses You Can Rent with Your Crew
Subscribe to this blog post Unsubscribe
Print

A team of researchers is trying to unravel a mystery surrounding a letter they think may have been written by a young girl on board the Titanic on the eve of its sinking.

A family came across the missive in a sealed bottle buried on a beach in Hopewell Rocks, Bay of Funday, in the Canadian province of New Brunswick four years ago.

The letter, dated April 13, 1912, is written in French and signed by Mathilde Lefebvre, who was 13 years old.

It says: "I am throwing this bottle into the sea in the middle of the Atlantic. We are due to arrive in New York in a few days. If anyone finds it, tell the Lefebvre family in Liévin".

Liévin, in Pas-de-Calais, was the French region she and her family hailed from. She was a third-class passenger with her mother, Marie Daumont, and three of her siblings.

She was going to join her father Franck Lefebvre, who had left France two years earlier to emigrate to America with his other children, according to the team from the University of Quebec at Rimouski (UQAR) which is examining the letter. 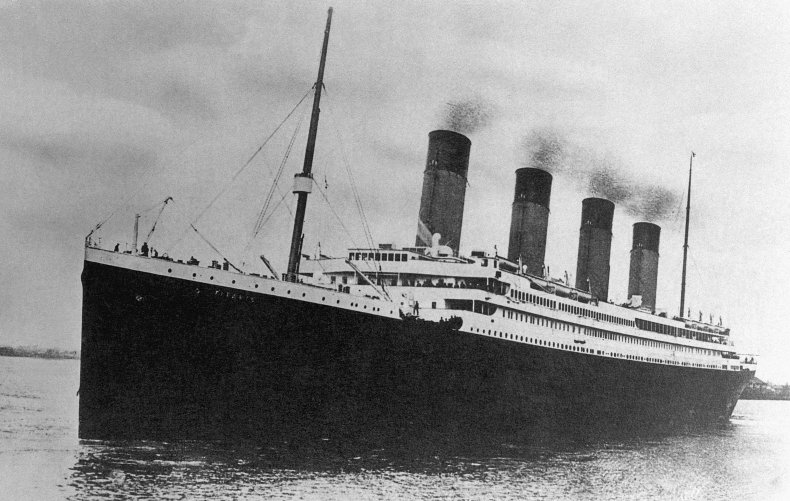 The White Star Line passenger liner R.M.S. Titanic embarking on its ill-fated maiden voyage. Canadian researchers are examining a letter written by a girl on board which was found on a beach. Getty Images

RMS Titanic, which was operated by the White Star Line, sank in the North Atlantic Ocean on 15 April 1912, after the liner struck an iceberg during her maiden voyage from Southampton to New York City. Mathilde and her family on board were among the 1,500 people who perished.

The UQAR team has studied the chemical composition of the bottle, the cork, the paper, and the ink. It also looked at the currents and erosion processes that would be required for the bottle to run aground and be buried.

It concluded that materially, the bottle and its contents were not incompatible with the date written on the letter but hope the public can help with some unanswered questions.

"This is for sure a very valuable document. We are sure that the paper of the letter and the bottle are materials dating from before 1912," Manon Savard, an archaeologist with the team, told Le Journal de Montreal.

In the past, there have been letters purportedly written on the Titanic which have turned about to be false.

This is why the team is cautious about categorically saying that this girl's message was from the time of the historic sinking that captured the public imagination for over a century and inspired an Oscar-winning film.

"We would all like to believe this story, but we have several questions about the authenticity of this letter," said Savard.

Among them is whether or not the handwriting would be what French children could produce at the turn of the 20th century.

Also in doubt are the odds that a bottle from the vessel could have washed up on a Canadian beach.

"Sea currents make it highly unlikely that a floating object has drifted from the North Atlantic into the Bay of Fundy [in New Brunswick]," Savard said, "It's not impossible, but it's unlikely."

One of the archaeologists on the research team, Nicolas Beaudry, said that there are still relatives of the Lefebvre family from Aix-en-Provence in France who had "an emotional commitment to this letter."

"It is very moving this shipwreck. Of course, the family in France is tempted to believe it. I think everyone also wants this to be true," he told Le Journal. Newsweek has contacted UQAR research team members for comment.

One foreign diver deported, one clings on after Koh Pha-ngan eco assault

Ocean Photographer of the Year Winners and Finalists 2020