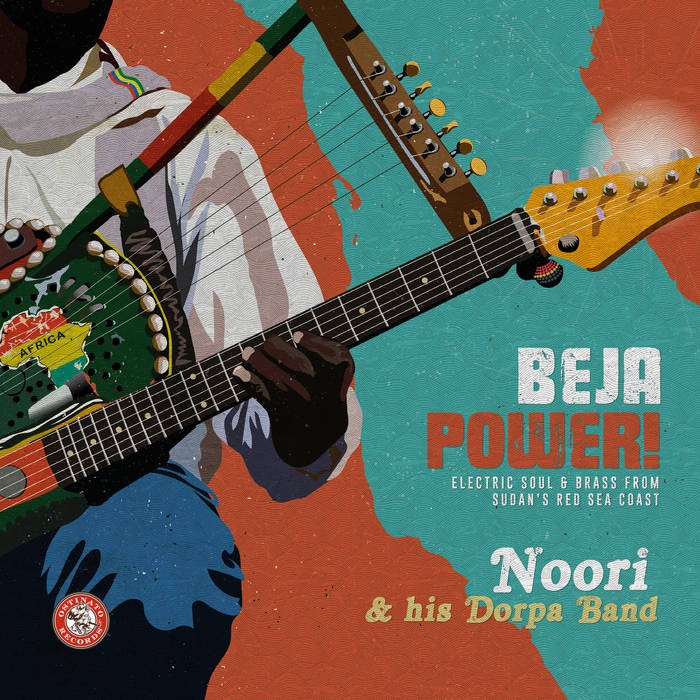 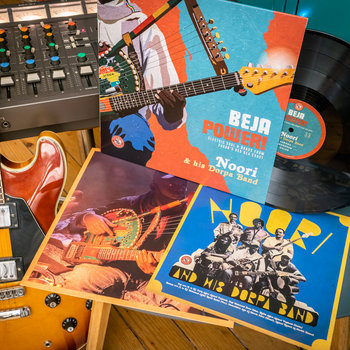 Noori was 18 when he crafted the tambo-guitar, a hybrid instrument that combined a tambour (a stringed lyre also known as the krar) with an electric guitar he found in a junkyard. With it, he envisioned keeping Beja music alive, something that was difficult in his home country of Sudan when the former Head of State, Omar al-Bashir, made deliberate efforts to erase the Beja peoples’s culture and deny them their rights. Since the 1989 military coup that led to his rise in power, the government has closed down the nation’s music halls, forbade the creation and consumption of music, with the exception of songs that explicitly glorified Islam or war; and facilitated the imprisonment, torture, and murder of artists. Fearing for their safety, many Sudanese musicians fled the country altogether, prompting a nationwide decline in popular music that’s persisted to this day.

Sudanese music has always been intertwined with politics and social change, and Beja Power! Electric Soul & Brass from Sudan’s Red Sea Coast follows that lineage. While it’s an entirely instrumental record, Noori believes that bringing this music out into the world can “form the most potent act of resistance,” moving in lockstep with Beja activists’s ongoing cries for justice. “Al Amal,” which translates to “Hope,” brings some clarity to this idea. Its percussion and rhythm guitar provide a sturdy foundation for the tambo-guitar and tenor sax to intertwine elegantly. At times they mirror each other’s sinuous melodies, and just as striking are the flashier solos. Their music soars in both an encouraging and focused manner, and one can credit that to their collaborative groupthink as much as their individual strengths.

One of the most stirring aspects of Noori & His Dorpa Band’s music is that they’re in dialogue with Sudanese music from decades past. Beja Power! recalls artists like Abdel Aziz El Mubarak or Abdel Gadir Salim in how, with their blending of Western and African musical styles, craft a sound all their own. One of the album’s highlights, “Jabana,” is a smoky blues endeavor but is more meditative than a typical desert blues track; It’s reminiscent of Loren Connors if it weren’t for the lilting sax and winding melodies granting it a more enchanting aura. Elsewhere there’s “Daleb,” spearheaded by a hypnotic, pulsing guitar rhythm that’s simultaneously jagged and cozy; and “Saagama,” whose arid guitar melodies and ambling tabla rhythms capture the spirit of traversing the Nubian. These longform, mesmerizing treks keep you locked in from beginning to end, and it echoes what Noori & His Dorpa Band represent: a firm commitment to upholding their people’s culture, and pushing back against all opposition.

MILESTONE REACHED, THE IADP IS NOW AN NPO IN FORMATION