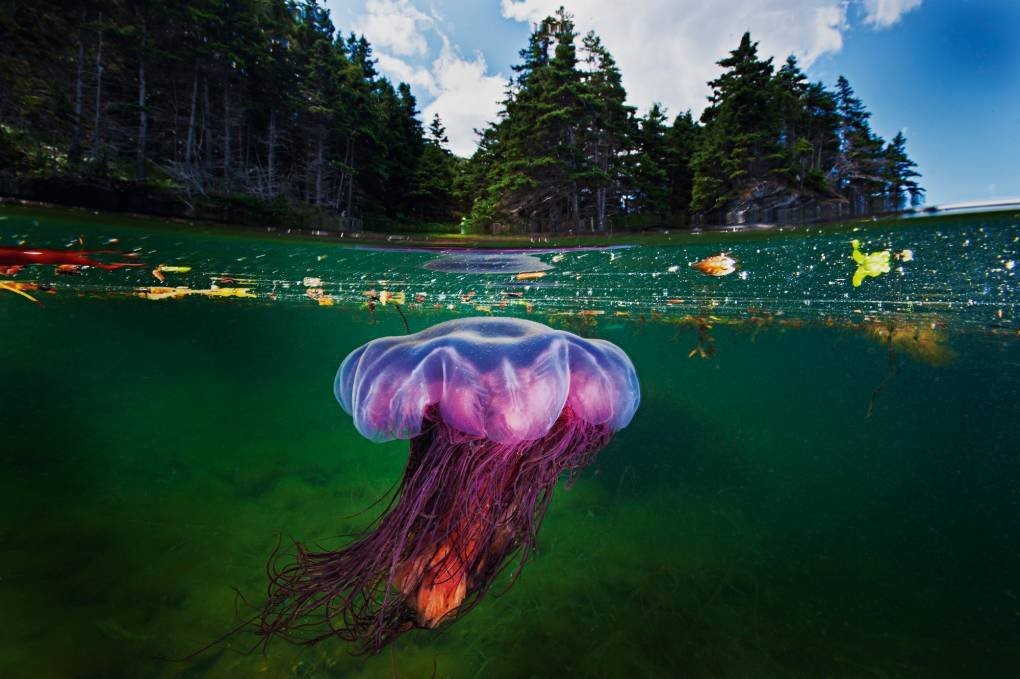 I had devised a daring plan to circumnavigate the jetty at the Ocean Beach Club on the Jersey shore. While I was out there, I was spotted by a screaming lifeguard. I sank until I could see, but not hear, him and discovered I could be in two worlds at one time. I could see him red-faced, blowing his whistle, and could look down at this world of green shafts of light and see tautogs admiring my new flippers. It was a world I wasn't just happy in, but comfortable in as well. It was all mine.

That was a first step on the road to what you call "the unalloyed joy of making images underwater." Talk about the role technology played in creating these over/under photographs.

They were made possible by the invention of an underwater camera housing called the OceanEye by National Geographic photographer Bates Littlehales. I began making these [above/below the sea] pictures on every assignment. I realized I could create a window into the sea, a way to invite people through a portal into a world just out of their sight. One of your memorable half and half images was made in the Cayman Islands: stingrays below; clouds above.

Want to see the power of the photograph? When National Geographic ran the story, everyone went to the Caymans to see the stingrays. Now thousands of people a day get off cruise ships [before COVID, at least] to meet those gentle ocean ambassadors and go home thinking and talking about them. With half a century of underwater photography and more than 77 stories under your weight belt, you've had an unprecedented opportunity to compare then with now. Let's consider the Great Barrier Reef. What changes have you witnessed?

We did a Great Barrier Reef story in 2001, then another in 2009. Reefs are the glory of the planet. They are the most vivid and visually diverse environment in the world. I always think of coral as weightless architecture if an architect didn't have to worry about gravity. One of the best examples was Opal Reef off Port Douglas [Australia] one of the places the snorkeling boats went to. It was dreamlike. When we went back in 2018 that section of reef was devastated. We made those 2009 pictures with the same crew, so we knew we were in exactly the same place — a 5,000-year-old reef dead in eight or nine years! A coral reef in Tumon Bay, Guam, 2017. Doubilet says these underwater constructions are like "weightless architecture if an architect didn't have to worry about gravity." (David Doubilet/via NPR)

If you want to know what climate change looks like, look at a reef. Reefs are the thermometers of the world. When the water gets more than 89 degrees and does so repeatedly, the algae that lives inside and powers the coral—a kind of underwater photosynthesis—is expelled. The coral turns white, a process known as bleaching. The reef becomes a boneyard. But the ocean has resilience. Scientists like Peter Harrison in Australia are working on ways to reseed and reconstitute reefs.

So all is not lost?

There's always hope. We can change. We can improve things. As of January 2020, 80% of Palau's waters are protected— an island nation preserving their reefs for the next generation. In 2011, the Bahamas became a shark sanctuary, setting an example that a living animal is more valuable than a dead one. Though you are most often associated with images made in tropical waters, the book includes some spectacular photos of icebergs.

I came late to the ice. An iceberg is a metaphor of the ocean. There's a little bit above which we can see and understand and the rest is out of sight. You are also talking climate change. As glaciers melt more and more icebergs are being produced. You've called natural history photographers like yourself the frontline reporters of the world.

The greatest story on earth is the earth itself. It's all we have. There is no Plan B.

Cathy Newman is a former editor at large at National Geographic whose work has appeared in The Economist, The Wall Street Journal and Science. Follow her on twitter @wordcat12.

Everything You Can Do In Bahia Honda State Park | TheTravel

The Terrifying Humiliation of a Sea Lion “Attack” While Surfing

What is the Blue Lagoon in Iceland Really Like?

Why Kalalau Trail Is Considered Difficult Even For The Pros