Do We Really Have Underwater Cities? These Were Once Believed To Be Thriving Metropolises

Atlantis is one of the most famous cities ever to be lost underwater. Many books and movies have been made about cities rumored to have disappeared in a day. In recent years, science fiction has become fact, as several underwater cities have been discovered in various parts of the world. Today, we will go over some underwater cities that were not so lost as Atlantis.

Just like Atlantis, these cities are below sea level and would be considered underwater cities. The following list is a compilation of underwater cities, towns, or villages that are either currently submerged or lost the majority of their population during one of their periodic floods. Many of these cities are not very well known, but they should be. It is quite a tragedy that so many people were lost.

In ancient times, Dwarka was a legendary city swallowed by the sea but re-emerged before the onset of Kali Yuga, an epoch associated with Lord Krishna. It is mentioned in Mahabharata and many other historical texts. In the Puranas, it has been referred to as Hiranyapura, a golden city submerged in the ocean by Satyavrata Manu, the progenitor of humankind. The remnants of this great city are believed to be off the coast of modern-day Dwarka, Gujarat. Evidence suggests that it could have been submerged around 10,000 years ago.

RELATED: These 15 Cities (From Around The World) Will Be Underwater By 2050

Port Royal was the first city of importance that England founded in the new world. It became known as “the richest and wickedest city in the world.” It was home to pirates, buccaneers, and housed 1600 buildings with 20,000 permanent residents. Rituals for sailors who died at sea were carried out in its church. By 1692, this great city had been reduced from a town of 6,000 people to only 300. The reason for this is the massive earthquake that hit Port Royal, causing it to sink into the ocean. According to many locals, there are still pirate treasures buried somewhere under what is now dry-land.

These urchin slayers are trying to save California’s underwater 'rainforest' 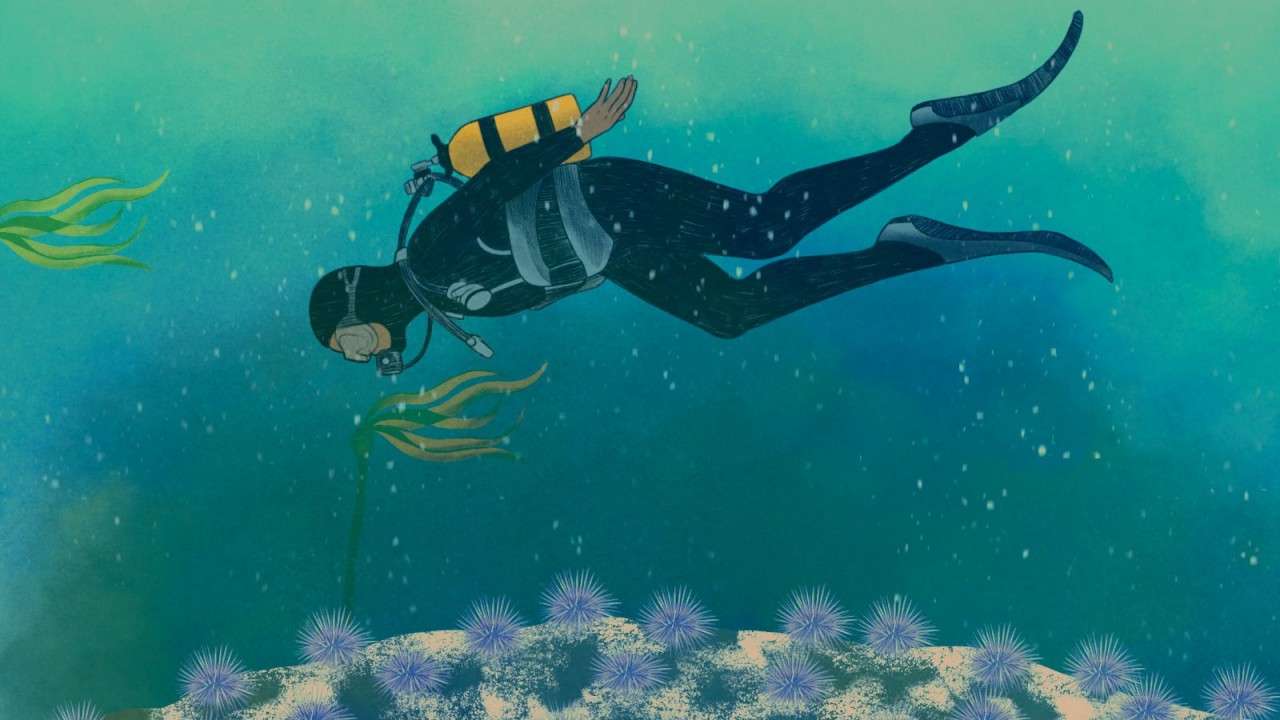 Grant Downie had been out of the Pacific Ocean for about 10 minutes when he realized he could no longer see out of his right eye.&nbsp;

The second-generation commercial diver had been deeper beneath the waves than usual searching for his catch &#8212; red sea urchins prized by restaurateurs for their uni, or sushi-grade gonads. But the red urchins, which dwell in underwater kelp forests, had gotten harder to find in recent years; each additional foot of depth forced more nitrogen into his bloodstream and upped his risk for dangerous bubbles lodging in his body or brain.&nbsp;

This time, with half of his vision a wall of black, he feared he’d finally pushed his body too far. Though his right eye regained its function 20 minutes later, the 33-year-old decided he was done with such risky dives, even if the decision would end up costing him income.&nbsp;

“I knew that was it for me,” Downie said last March, about seven months after the incident, which took place off the coast of Fort Bragg in Northern California. “I’ll probably go down to 65 feet, but I don’t know if I’ll do that deep, deep edge. It’s getting harder and harder for the guys that are still trying to go.”

Anyone who depends upon California’s kelp forests for their living can tell you that something is very wrong below the surface of the Pacific. It’s not just the red urchin population that is on the decline. Gone is much of the kelp, the dense, autumn-toned canopies of seaweed that once provided food, shelter, and safer haven to hundreds of marine species &#8212; from sea otters to abalone, rockfish to brittle stars. Where lush strands of giant kelp or whip-like bull kelp once swayed, entire swaths of the underwater forests have been razed to nubs by one particular predator: the purple urchin.

The finalists for this year’s Ocean Photography Awards have just been announced, and this year’s high standard of submissions provide a rich and varied look at the ocean, from multicoloured squid and translucent deep-sea creatures to very curious sea lions and split-shots of crocodiles at sunset.

However, as we too well know, human interaction with the ocean isn’t always positive. The dangers of ghost fishing lines and discarded face masks to aquatic species are something all-too-common, while vast trawler nets and melting ice remind us that the health of the world’s oceans are under constant threat. 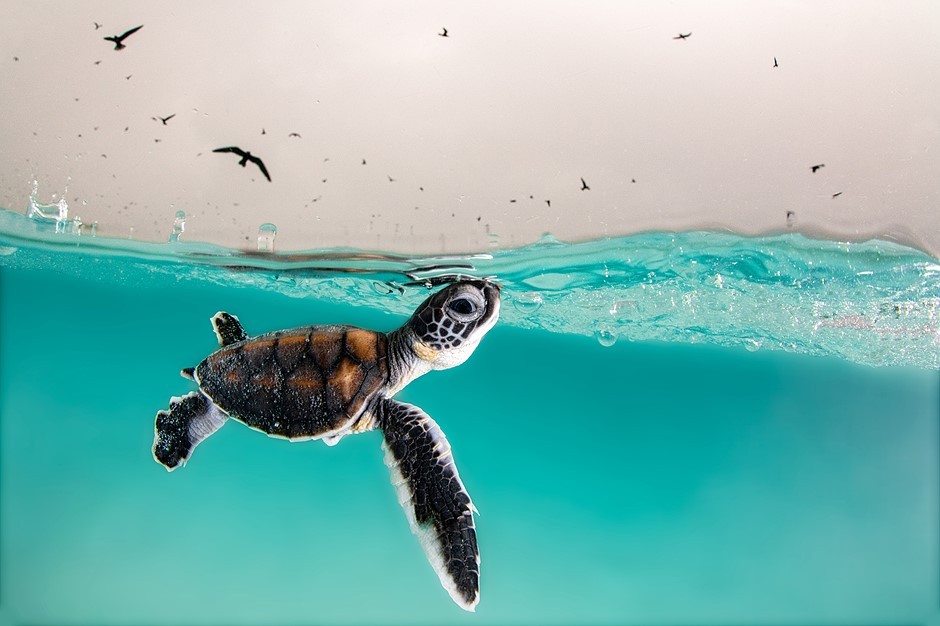 Finalists across six categories, including Collective Portfolio, Youth Photographer of the Year, and Conservation have been announced for the second annual Ocean Photography Awards. Public voting to decide the winners is currently open. Winners will be announced in a series of videos that will air September 10th – 16th. An open-air exhibition will be available to the public on September 17th alone the River Thames, close to Tower Bridge.

'As a keen scuba diver and underwater photographer, I appreciate what it takes to capture extraordinary photographs of the ocean: passion, skill and commitment to your craft. The finalists of the Ocean Photography Awards 2021 display those assets in abundance. Their images reveal the ocean for what it is – or at least what it should be – a place full of life, colour and wonder. They also remind us of the injustices we are inflicting upon it,' says Marc A Hayek, president and CEO of Blancpain – one of the contest's partners.

All finalists can be viewed on the Ocean Photography Awards homepage. 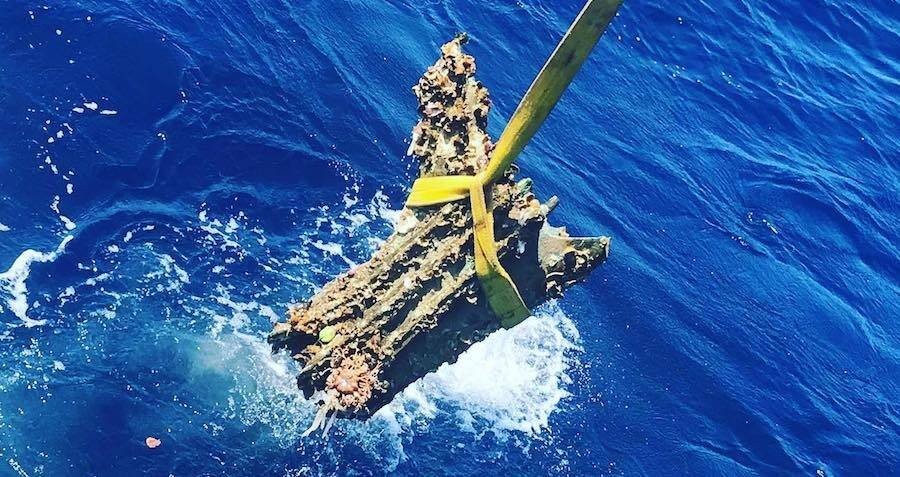 The ancient Roman battering rams held inscriptions from judges who signed off on their construction and held three enormous blades on each side to tear through enemy ships.

The First Punic War, fought between Ancient Rome and Carthage for supremacy over the western Mediterranean, began in 264 B.C. It was the most prolonged naval conflict in antiquity. For 23 years on the seas from Sicily to North Africa, warships clashed with their battering rams — four of which have just been found.

Each of these colossal artifacts was made of bronze and weighed 450 pounds. Formerly fitted to the bows of Roman warships, they tore into the enemy vessels of Carthage at the Battle of the Aegates on March 10, 241 B.C. The fight was so brutal that it ended the First Punic War in a single day.

After thousands of years on the seafloor, these ancient weapons of war were finally retrieved from wrecks off the coast of Sicily, where the battle took place. The retrieval effort was conducted by the U.S. RPM Nautical Foundation and Sicily’s Marine Archaeology Unit, and the find has shed new light on the wars of antiquity.

Historical accounts indicate Ancient Rome sank up to 50 Carthaginian ships with these rams, which held three enormous blades that ripped into the wooden hulls of enemy ships. 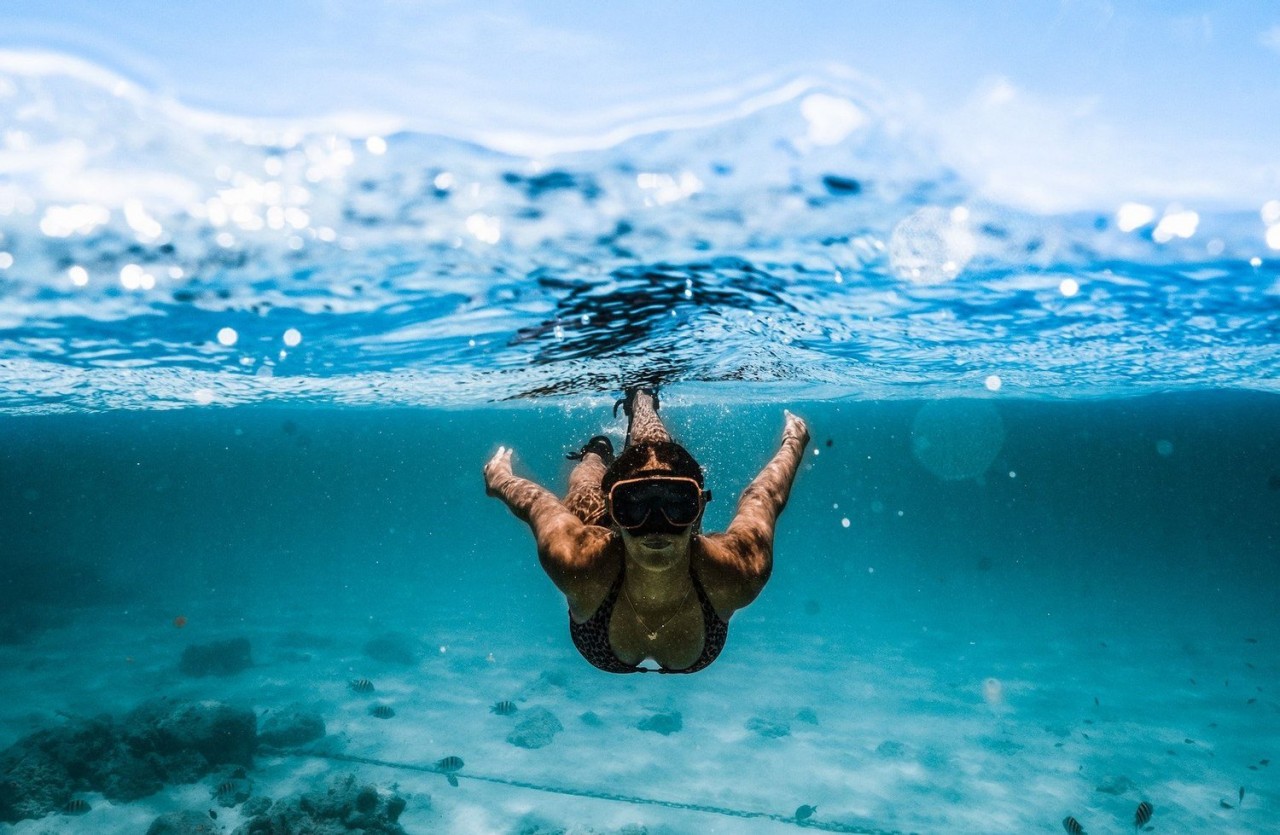 Miami is already home to a long list of interesting attractions, and that list keeps growing. According to a report from My Modern Met, the city will soon open one of its coolest attractions to date—just don't expect to be able to drive to it.

This new Miami attraction, called the ReeflLine, will be located completely underwater.

A partnership between architecture company OMA and marine conservation organization The BlueLab Preservation Society, the ReefLine will be seven-mile underwater art park, complete with sculptures created by a range of noteworthy creatives. Better still, it will have immediate environmental benefits, as it helps mitigate coral reef damage and rising sea levels.

The ReefLine will open in two phases. The first phase is expected to commence towards the end of 2021. At that point, highlights will include reef sculptures, a snorkeling path, and a “traffic jam” exhibit composed of concrete cars. The second phase will commence further down the line. Details of that phase still haven't been revealed.

“The ReefLine is unique because it brings attention to and mitigates the dangers of climate change in Miami, while simultaneously enriching the city’s vivid art scene,” OMA partner Shohei Shigematsu, who is leading the design, told My Modern Met. “We look forward to working with the diverse group of experts and professionals on our first underwater cultural masterplan and sculpture.” 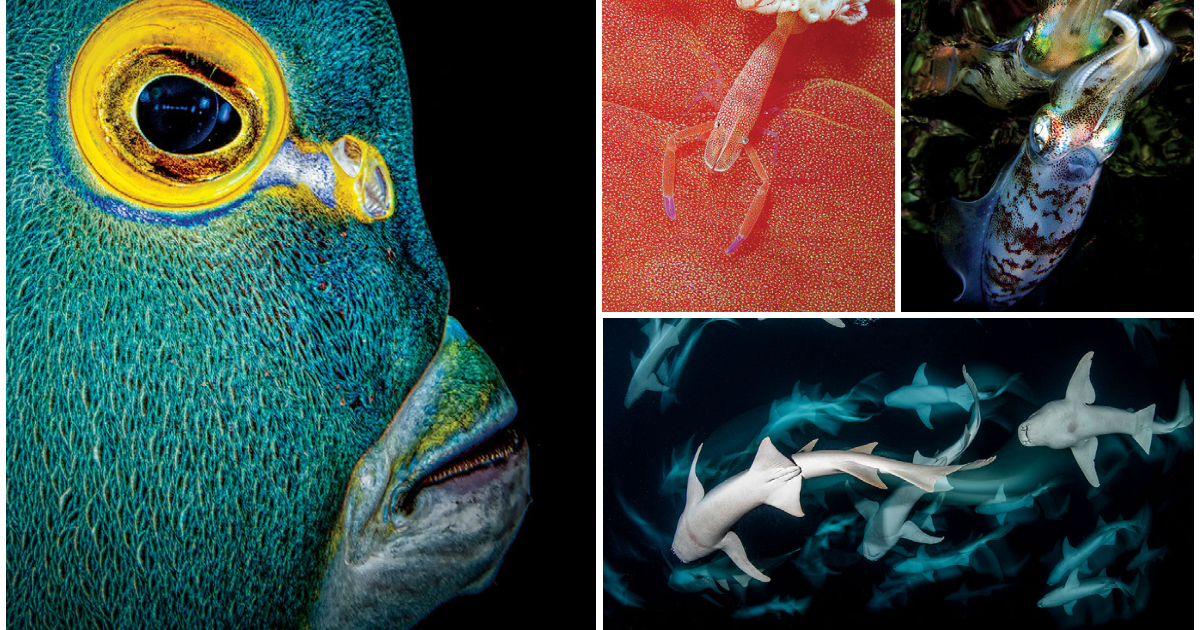 There’s underwater photography, and then there’s underwater photography—images that turn the everyday into art; high-speed collisions of skill and serendipity; dispatches from an alien world few will ever lay eyes on in person. These are the hallmarks of this year’s contest winners, chosen by our staff from 1,719 total submissions. Each winning photo possesses some sublime quality that caused our judges to stop in their tracks, forcing them to take it all in. We know you’ll find them just as captivating.

A very special thanks to our prize donors: Aggressor Adventures, Scubapro and SeaLife Underwater Cameras. Without your remarkable contributions, we could not continue our support of this contest and the photographers who inspire us.

CHECK OUT THE 2020 WINNERS HERE

Diver Finds Gold Coin Worth $98,000 on Wreck Off Key West 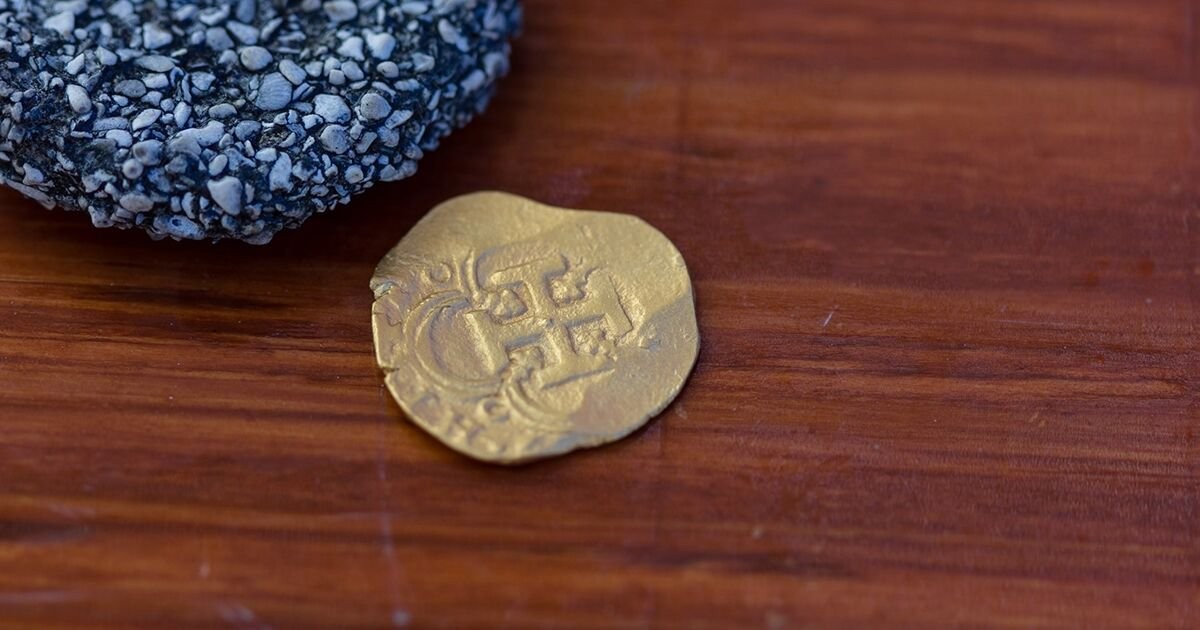 The son of treasure hunters who helped discover a wreck in the 1980s worth $400 million recently found a gold coin worth at least $98,000 on the same wreck.

Zach Moore, a diver and engineer at Mel Fisher’s Treasures, found the rare coin in about 30 feet of seawater on the wreck of the Nuestra Señora de Atocha. The ship sank in a hurricane in 1622, just 35 miles off Key West.

Moore was diving the wreck with an underwater metal detector when it pinged to alert him of a silver coin in his path. After he recovered that coin, which he says he was “ecstatic” about, he spotted something about three feet away that was even more exciting — gold.

The coin was wedged into a small hole in the bedrock.

Diving among ancient ruins where Romans used to party 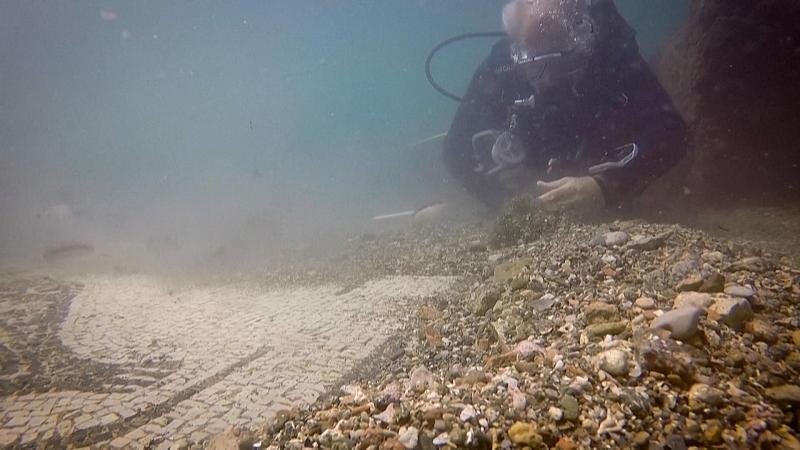 Mysterious Titanic message from doomed passenger leaves experts puzzled
DIVING
A team of researchers is trying to unravel a mystery surrounding a letter they think may have been written by a young girl on board the Titanic on the eve of its sinking. A family came across the miss...
379 Hits
0 comments
Read More