The scale of the open-sea drama in Chasing the Thunder, a 2018 documentary now streaming on Discovery+ about the longest pursuit of an illegal fishing vessel in history, is fittingly and at times mind-numbingly colossal.

For 110 days in early 2015, the Bob Barker, a ship outfitted by the nonprofit Sea Shepherd to police some of the planet’s most remote waters, chased the Spanish-owned Thunder for over 10,000 nautical miles, from the Antarctic to the western coast of Africa. The two ships – one an infamously lucrative illegal fishing vessel, the other an eco-vigilante trawler largely staffed by young, idealistic volunteers – endured water temperatures that could kill by cardiac arrest, cyclonic storms with 50-ft swells, and pack ice that could congeal and trap a boat in minutes.

Less storytelling, please: why documentaries will benefit from getting real

Chasing the Thunder, directed by longtime film-making partners Mark Benjamin and Marc Levin and co-produced by the late Microsoft co-founder Paul Allen, follows one of the more volatile chapters of the high-stakes fight against illegal fishing. A visual account of concurrent reporting on the Outlaw Ocean by the New York Times’s Ian Urbina (who does not appear in the film), it’s a 96-minute time capsule of the Wild West that is illicit fishing on the high seas, where shady vessels with the murky backing of organized crime rake in massive profits from the earth’s plummeting fish populations, and dogged nonprofits stand in for the intensive, costly enforcement individual governments are unable or unwilling to provide.

The crew of the Bob Barker and its partner ship, the Sam Simon (named for two famous donors to Sea Shepherd, which has long had close ties to Hollywood), understood what many laypeople do not: illegal fishing is big, open and ecologically devastating business. At the time of filming in 2015, it was a $10bn industry, policed in name by Interpol and cooperative countries but in effect by no one, save eco-vigilantes trained and equipped enough to brave the elements.

The Patagonian toothfish sought by the Thunder, known to American consumers in a strategic rebrand as “Chilean sea bass”, can grow up to 6ft in length and weigh more than 250lb. It dwells a mile deep in Earth’s coldest waters. By the time Sea Shepherd spotted the Thunder in the hinterlands of the Southern Ocean, it had made upwards of $60m on so-called “white gold”, a fillet of which can sell in the US for $30 a plate, despite a nine-year ban on the vessel and a spot on Interpol’s Purple Notice bulletin (the maritime equivalent of a Most Wanted list).

Illegal, unreported and unregulated fishing (IUU) is a significant contributor to the ocean’s dwindling stocks of commercial fish; some estimates suggest 90% of the world’s population of large fish such as tuna, marlin, and swordfish have already vanished. One in five fish imported to the US was likely sourced illegally. Violators range from individual outfits adapted to industrial-scale illegal fishing, such as the Thunder (which Interpol suspected was backed by a Spanish illegal fish kingpin named Antonio Vidal), to China’s state-sanctioned fleet illegally catching squid off the coast of North Korea.

Illegal and overfishing seriously threaten the global food supply and long-term recoverable health of the planet’s oceans, but short-term profit motives have unsurprisingly won out. It’s “not unlike the petrochemical industry – they knew for decades about global warming; they didn’t tell anybody. It wasn’t in their interest to tell anybody,” Benjamin told the Guardian. “The fishing industry knows that they’re collapsing this bounty.”

Sea Shepherd, the eco-vigilante nonprofit established by Greenpeace co-founder Paul Watson in 1977, explicitly works to prevent such damage in international waters, where national enforcement is scarce. In Chasing the Thunder, the organization’s crews sought not just to spare fish from the Thunder’s destructive gillnets, which kill marine life indiscriminately a mile beneath the Antarctic waves, but to demonstrate that violators of fishing regulations could and would be brought to justice. “The crew understands that the vigilantism is needed at a time when criminality is so rampant,” said Benjamin. “And I think every member of the volunteer crew [felt] that they had to be part of that.” 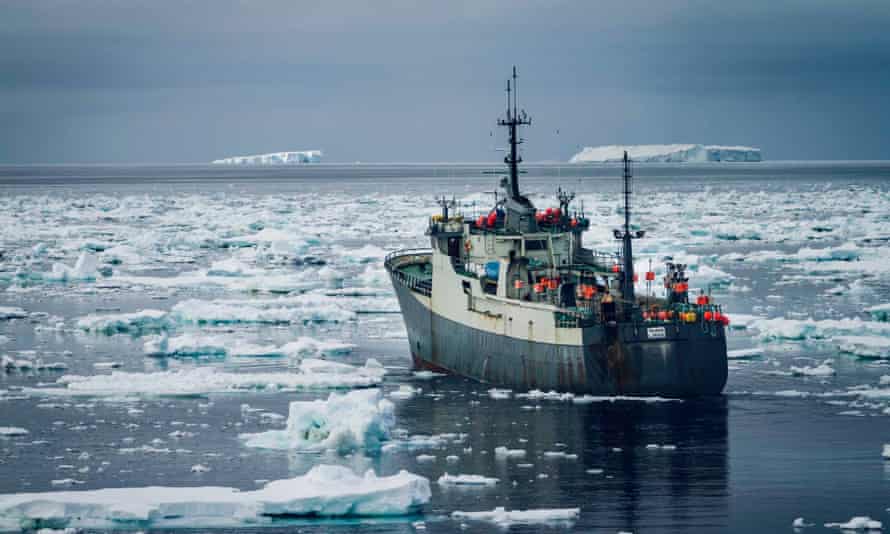 The Thunder swimming through the ice. Photograph: Simon Ager/discovery+

Chasing the Thunder, largely filmed by Sea Shepherd staff on board during the 2015 chase, also captures the more recognizable scale of human folly, fury and commixing at sea: the Thunder crews’s cigarette breaks on deck, spotted by binoculars; tense radio calls between the vessels, handled by a translator; the fraught attempts to communicate with the Thunder’s largely Indonesian crew, who likely work for $100-$150 a month and whom Sea Shepherd leaders do not hold responsible for the illegality of their labor, through messages in a bottle tossed from electric dinghys. (A masked Thunder sailor tossed back a section of metal chain.)

There’s a playful back-and-forth between the ship’s two captains, Bob Barker’s Peter Hammarstedt, an even-keeled Swede, and Sam Simon’s Siddarth “Sid” Chakravarty, an Indian whose crew spends weeks pulling up nearly 45 miles of the Thunder’s gillnet (and, much to our collective horror, hundreds of dead toothfish worth over $210,000) as evidence for a legal case against the ship. The duo’s warm collaboration was “sort of was like a love story to me”, said Benjamin, “these two captains who had so much respect for the job they were doing, and that they treated each other with such dignity and respect”.

The same cannot be said for the dialogue with the captain of the Thunder, a Chilean named Alfonso Rubio Cataldo, whose desperate frustration channels into a couple of near-disasters. At one point, inflamed by Sea Shepherd’s confiscation of their illicit fishing gear, the 202-ft, steel-sided Thunder abruptly turns around and charges the Barker, which eludes collision by a yard. The saga ends (again, 2015, but spoiler alert) with the sinking of the Thunder miles off the western coast of Africa, in what appears to be a deliberate scuttling to bury damning evidence – thousands of pounds of toothfish, logs, computers, records – beneath the waves. 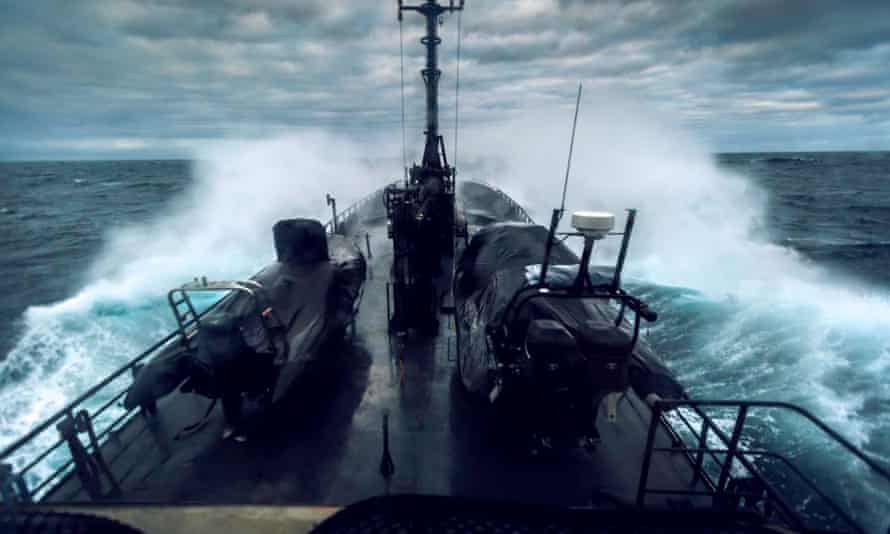 The deck of the Bob Barker during the storm. Photograph: Simon Ager/discovery+

“It was sink or turn yourself in” for the Thunder, said Benjamin, “and they must have gotten the word from someone. No one will ever really know who was benefitting from the Thunder because the industrial legal fishing industry is shrouded in secrecy, but the illegal fishing industry is a mystery to everybody.” Still, thanks in large part to the Simon’s evidence collection, Cataldo, the Thunder’s chief engineer and another mechanic were sentenced by a São Tomé and Príncipe court to prison sentences ranging from two to three years.

Such concrete justice is a rare success story in the realm of environmental documentary, said Benjamin, especially as illegal and over-fishing continue to deplete vulnerable populations. “History is going to judge us by what we saved on this planet,” said Benjamin. Chasing Thunder follows, for a monumental season, “people who have boots on the deck, put their heart into it and give it everything they’ve got. That’s why they have a victory at sea. And that’s why the Thunder went down, and that’s why the captain went to jail, and that’s why the Patagonian toothfish is more protected today, and those illegal vessels are gone from the Southern Ocean.

“That’s thanks to people just like you or me, not mercenary rambos or ex-GIs or special forces,” he added. “They’re actually just a bunch of amazing, young dedicated people.”