OCEAN STORIES
The fresh, coastal air awaits when you book your next family vacation at one of these charming lighthouses. From a private island in Maine to some beauties along the Northern California coast, these l...
Read more
Eco-friendly $811m superyacht powered by solar-panel 'sails' unveiled
Giant pristine coral reef discovered off Tahiti
BRP commits to complete electric line, jet skis, motorcycles, go-karts, more
A Photographer Marries the Worlds Above and Below the Water in a Single Frame | KQED
Octopuses, like humans, sleep in two stages, may dream - ARY NEWS
Mako-Ing History: Uncovering Mako Shark Movements In The Gulf Of Mexico
World's largest aquarium nears completion in Abu Dhabi
Netflix’s New Documentary ‘Seaspiracy’ Is As Eye-Opening As It Is Terrifying
‘Becoming Cousteau’ Shows the Evolution of the Underwater Icon
11 Gorgeous Lighthouses You Can Rent with Your Crew
Subscribe to this blog post Unsubscribe
Print

Tired but determined, 5 young activists continue their hunger strike outside the White House 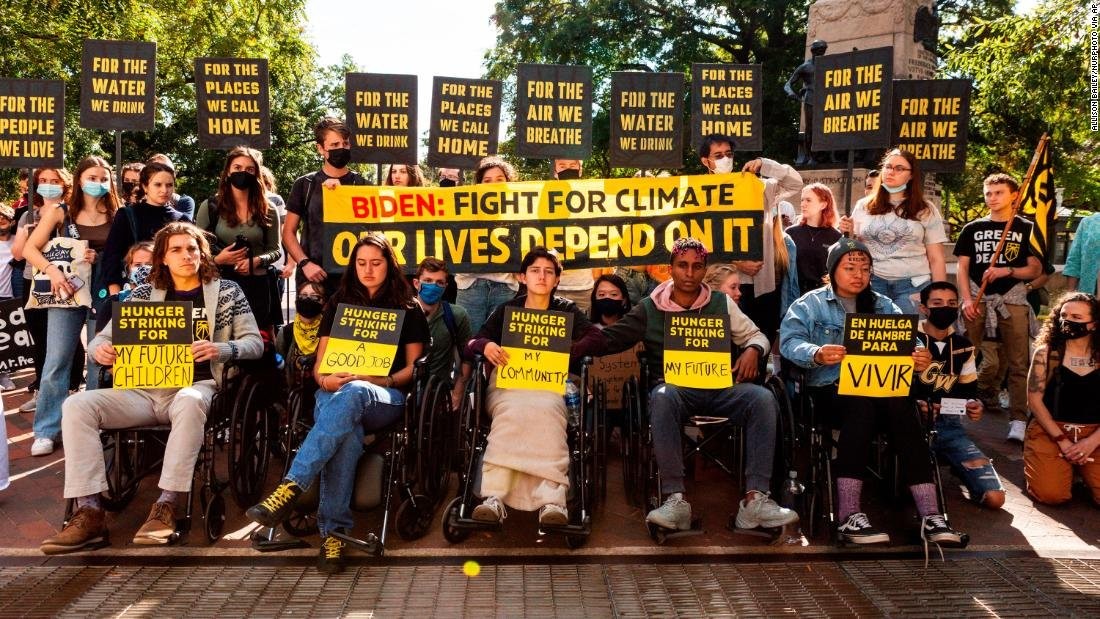 Kidus Girma, 26, a climate activist and organizer, is one of the five. He told CNN a doctor who has been monitoring the strikers sent him to the emergency room Saturday, for nausea, dizziness and blurred vision. Girma said physicians monitored him overnight, then he returned to the strike. He and his fellow strikers, who have been protesting in Lafayette Square since October 20, are now using wheelchairs to keep them steady.

"I'm seven days into the hunger strike and my body hurts, my stomach honestly feels vacuous, my body feels vacuous, and I have a headache that won't go away," Girma told CNN. "We're at the point where our muscles are being eaten up by our bodies."

It's not the first time Girma has taken bold action on behalf of the planet. In May, he said he participated in the Sunrise Movement's 400-mile march that traced the path of climate disasters from New Orleans to Houston.

"We will continue to sit starving outside the White House everyday until you use your power as elected president of the United States to deliver your mandate for bold, and transformative climate action with justice and for jobs," the strikers wrote in the letter, shared first with CNN. 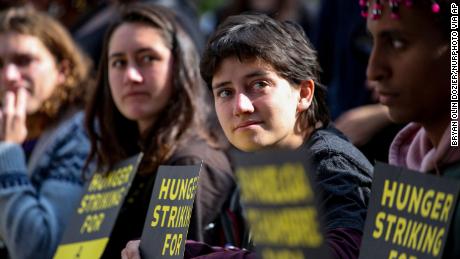 Members of a youth-led hunger strike sit in wheelchairs near the White House on October 22.

On Monday, they had a virtual audience with White House National Climate Adviser Gina McCarthy and Special Presidential Envoy for Climate John Kerry during a meeting with progressive groups.

Hunger striker Paul Campion said he spoke with Kerry, who told him he feels climate negotiations are in a good place in Congress — even though a key climate program, the clean electricity program, has been cut. Campion told CNN he wasn't satisfied with that answer.

"He kept saying there are complications in the Senate," Campion told CNN. "I was pretty furious and pretty disappointed."

A source familiar with the meeting told CNN Kerry said he was inspired by the activists' dedication and commitment to addressing the climate crisis, and talked about his own youth activism. Kerry told the activists he was proud they were protesting, the source said.

A White House official told CNN while there are no further meetings scheduled between the strikers and administration officials, the Biden administration "is inspired by the dedication and commitment of young people across the country and world calling for bold action to tackle the climate crisis."

"We hear their voices and are working hard to deliver ambitious and lasting results that creates good-paying union jobs, advances environmental justice, and fulfills our responsibility to future generations," the official said.

Campion told CNN even after a grueling seven days without food, he and his fellow strikers plan to continue "indefinitely."

"My body is weak, I lost a lot of weight," Campion said. "My friends and I are tired but we're determined. We will continue this hunger strike until our demands are met." 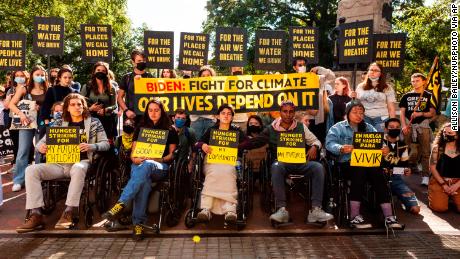 Demonstrators stand behind five young people on a hunger strike near the White House.

Their action comes during a critical week for US climate policy. Democrats could reach a deal on the climate measures in their sweeping economic package, and Biden will soon leave for the UN climate summit in Glasgow, also known as COP26. It's an open question whether the President will have climate legislation in hand as he presses other countries to raise their own ambitions.

On Tuesday, hunger striker Abby Leedy confronted West Virginia Sen. Joe Manchin, the moderate Democrat who opposed a $150 billion clean electricity program in the economic package, which has left the White House and other lawmakers scrambling to replace the cornerstone climate policy. 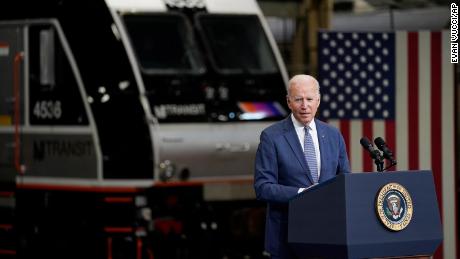 Leedy pleaded with Manchin to protect the climate measures in the bill.

In response, Manchin told Leedy and other protesters the US has "done more than any nation on Earth to clean up the environment," and emphasized the growing number of coal-fired power plants outside the US, particularly in China and India, in contrast to the dwindling number in the US.

"We have basically reduced emissions in the last 10 years more than anybody else," Manchin told the protesters. "But yet you think America is doing this, and that is just not fair."

Other climate activists and scientists have posted images of themselves on social media in solidarity, showing they, too, are participating in the hunger strike for climate.

Girma said the hunger strike is a proportional response to the scale of the climate crisis, and that it is here now and not a problem for the future.

"Hunger symbolizes what we're starving for — what we deeply need in this moment," Girma said. "And it also shows the possible future that Biden is making really possible if he doesn't start fighting for us."

‘When I feel freedom I am at home’: Why surf legend John John Florence chases bliss over victory

‘It blew our minds’: the surfers who braved sharks to ride Africa’s mightiest wave