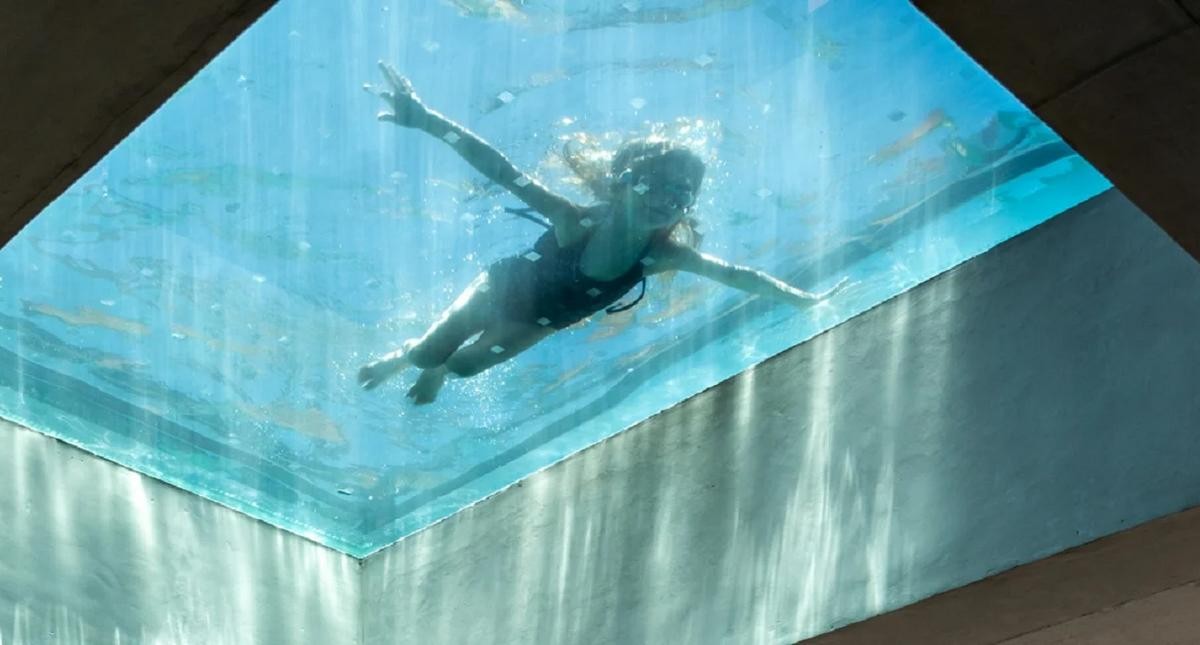 Light is the magical ingredient that can single-handedly make or break a space. Whether it is mood lighting in a futuristic smart bathtub by Kohler or the ultra-cool lighting elements inside the cabin of 2021 , Mercedes-Benz S-Class, the experience of a great ambiance is only created with the help of lights. Similarly, architects Rogério Gurgel and Caio D’alfonso have given an upscale and spacious home located in Itaim neighborhood in Sao Paulo, Brazil, a unique makeover involving an all-glass rooftop swimming pool. This addition serves as the core element of the interior, making for an individual, distinctive design. Not only is it a luxe addition to the super stylish revamped home, but it also plays an integral role in the creation of visual dynamics that heavily contribute to making the space look avant-garde with perpetual mood-lighting, almost like the environment is living right in their living room. The designs have chosen colors, materials, and textures that amalgamate to create a harmonious interior with the effects of the light filtered through the pool. It’s fascinating to see the magic unfold as the pool filters the light in a gentle way while instigating the visitor’s curiosity about the upper floor. Waking up to retractable roofs is also becoming commonplace. Still, the base of an all-glass pool replacing the ceiling while adding so much charisma to the interiors is pretty novel.

The furniture is deliberately chosen in neutral tones and the rug in different shades of green to augment the remarkable atmosphere under the pool. On the upper floor, next to the pool, lies the lavatory that stands out thanks to extravagant red Rosso Lepanto marble counter, custom-made in a floating steel structure designed by Rogério Gurgel and Caio D’alfonso themselves.

READ:  Why Cruising On The Amazon Should Be On Your Bucket List

On Board the Palm Beach GT60, the Boat Everyone Wants 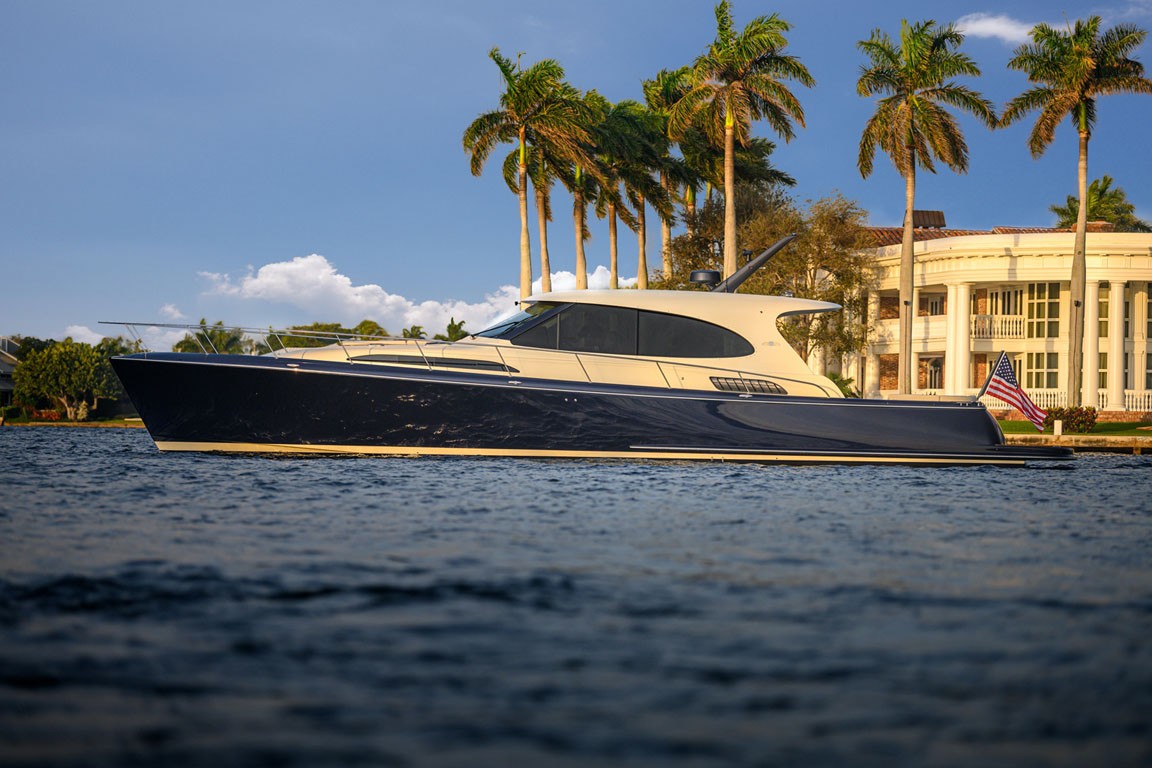 There’s no stopping a thoroughbred.

One can’t help but admire Palm Beach Motor Yachts. The Australia-born, Florida-based company unleashed a world-beater at the 2019 Cannes Boat Show with the debut of its highly acclaimed GT50 motor yacht. Then the company turned things up a notch in early 2020 when it revealed an all-new GT60—first at the Dusseldorf Boat Show for the European market, then three weeks later in North America at the 2020 Miami International Boat Show. But no sooner had the company packed up its display in Miami than the global volcano called COVID blew its top, bringing the GT60’s worldwide launch party to an abrupt halt.

But not even a global pandemic could keep a yacht as brilliant as the GT60 out of the spotlight for long. As testament to its truly remarkable design, the GT60 defied the odds and continued to find new buyers organically, in spite of countless boat show closures and travel restrictions that make it nearly impossible for buyers to even see the boat up close. In spite of every obstacle thrown at it, the GT60 remains coveted, and credit for that lies squarely at the feet of Palm Beach CEO and yacht designer Mark Richards. 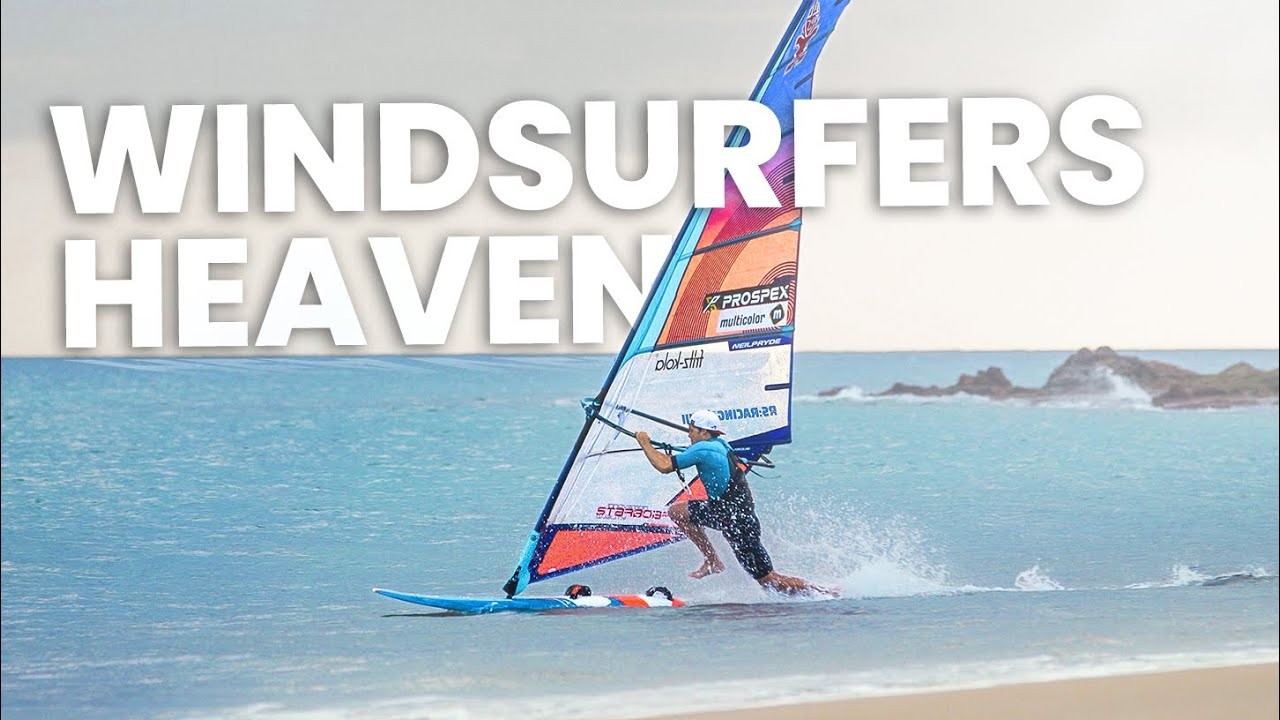 Ever enthusiastic sailor, Nico Prien takes us on a guided tour around El Medano on Tenerife, he did not quite hit the perfect days but still managed to score some decent sessions on the water. 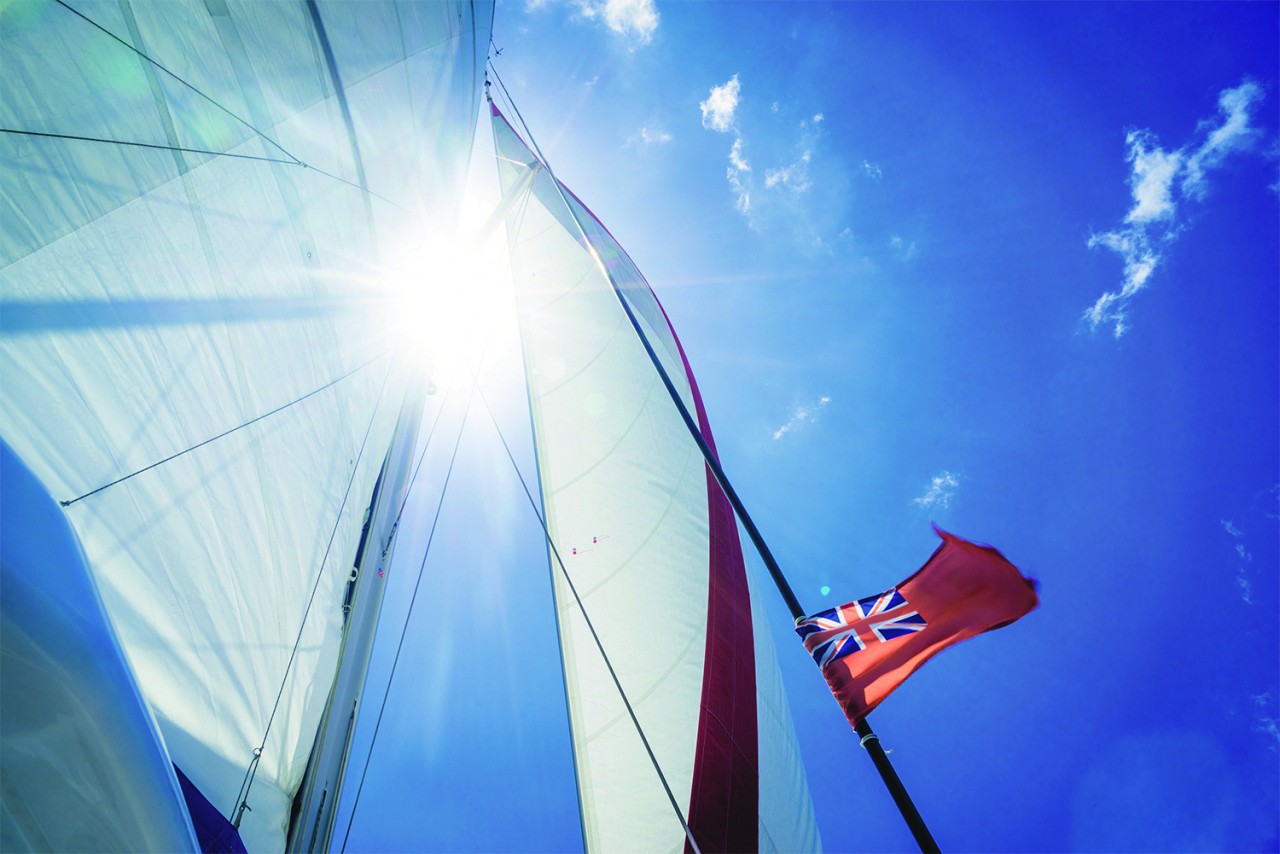 The RYA and British Marine have won a crucial extension from the Government on a controversial policy that would heavily penalise boat owners returning to UK shores post-Brexit.

HM Revenue and Customs (HMRC) have announced a 6-month extension to the 1-year grace period previously put in place by the government, on the issue of Returned Goods Relief.

It means the RYA and British Marine have another six months to negotiate the matter and for the next 18 months at least, boat owners can bring their boats back without a heavy financial penalty.

The announcement follows concerted representations from the Royal Yachting Association (RYA) and British Marine asking for a 3-year transition period.

Both organisations have consistently pointed out that the 1-year period of grace effective from 1 January 2021 in respect of the three-year condition for RGR was not sufficient. 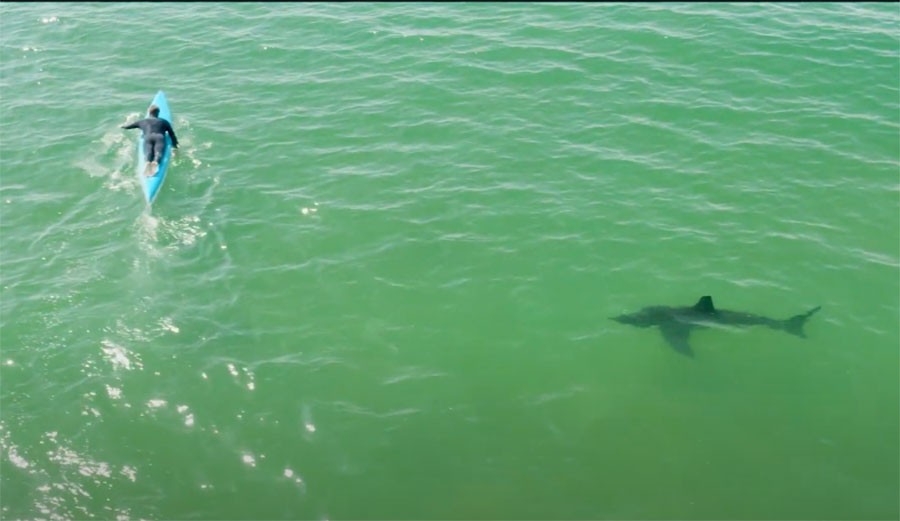 Sharks get a bad rap. None more so than great whites — thanks largely in part to films like Jaws — but in reality, the actual chances of a shark attack are extraordinarily slim. Off the coast of California, a place generally full of people, there have only been 128 confirmed unprovoked shark attacks from 1926 until today. And in March, a paddle boarder didn’t notice a great white shark right behind him. Juvenile whites aren’t something anyone needs to worry about, either. In fact, they hang out near dolphins relatively frequently, because they eat a lot of the same things.

Great white sharks can reach lengths of up to 20 feet and weight up to 6,000 pounds. They generally live for about 30 years, give or take a few, and they’re one of the most important creatures when it comes to maintaining a healthy balance in the ocean. As a top predator, they keep prey populations in check.

In doing so, the great white increases the stability of a given species and ensures a greater diversity in the ocean. Females generally mature later than males; at about 12-14 years old, while males mature between 9-10 years. They aren’t looking to eat humans, either. They’re known as opportunistic predators, and when they’re young, they often eat fish, rays, and crustaceans. As they age, they move onto seals and sea lions, but will eat birds, dolphins, and even other sharks.

Carlos Gauna, known also as the Malibu Artist on YouTube, looks for sharks off the California coast in the Los Angeles area an awful lot. He captures truly amazing footage of sharks in the wild, and the footage you see above is yet another example. “It’s a sight that never gets old,” Gauna said. “A sight that I feel great gratitude to be able to witness so often.” 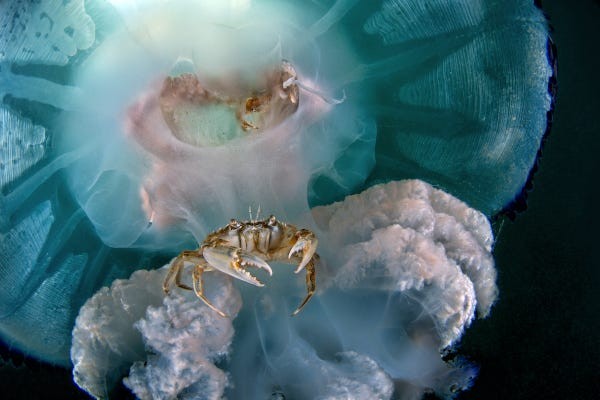 These award-winning photos will transport you to an unfamiliar, otherworldly water landscape. This wide-angle shot of an octopus' tentacles from Gaetano Dario Gargiulo won best in show.

Gargiulo shot this image in some tide pools in New South Wales, Australia.

"In one of the shallowest parts of the [tide] pool I noticed an octopus. I placed my camera near its den and the octopus started interacting with it," Gargiulo told Underwater Photography Guide.

Tums and Dragons - A game of class

The success of a yachting class often rests with a few unforeseen events and decisions. For over 90 years two similar boats, the Tumlaren and the Dragon have competed for devotees.

The Dragon was designed in 1928 by Norwegian Johan Anker while the Tum was designed four years later by Knud Reimers, a Dane working in Stockholm.

In 1936 the St Kilda Yacht Club in Melbourne (now Squadron) was keen to adopt a one design class. After reviewing several options they chose the Tumlaren as the best boat for Port Phillip Bay. A license agreement was made with Reimers office and five boats were quickly built for the 1937/38 summer season. WWII quickly interrupted development and racing and by the late 1940's the Dragon had already dealt several blows to hopes of expanding the Tum fleet outside Melbourne and Adelaide.

A female surfing world champion has been promised the recognition she deserves after being featured in a new documentary.

Pauline Menczer won the 1993 women’s surfing world championship but didn’t receive any prize money or sponsorships for her feat.

Sydney’s Waverley Council, which is responsible for Bondi Beach, announced this weekend it would honour Ms Menczer, who grew up in the beachside suburb.

“I believe that Waverley needs to honour its golden girl of surfing and that the council needs to formally consider ways we can do that,” Mayor Paula Masselos said in a statement.

Suggestions include a plaque or statue, a feature inside a story room at Bondi Pavilion, or a feature among the art pieces on the Bondi Beach Sea Wall.